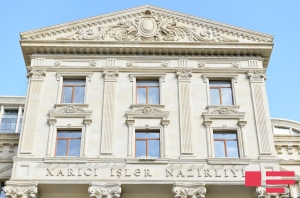 The actions of the Netherlands against Turkey go beyond diplomatic ethics, Azerbaijani Foreign Ministry spokesman Hikmet Hajiyev told on Sunday.

Axar.az reports that some European institutions and in particular, a number of groups in the European Parliament, as well as the Netherlands, have made a "habit" of unreasonably criticizing other states, carry out "mentoring" and make claims against others using each opportunity, Hajiyev said.

The acts of the Dutch government, which considers human rights and democracy as its fundamental principles, against official representatives of Turkey, preventing Turkish people living there from assembling freely and use of force against them is of biased and contradictory nature, added the Foreign Ministry spokesman.

These actions are also a grave violation of the Vienna Convention on Diplomatic and Consular Relations, as well as such fundamental principles as human rights and freedom of assembly and freedom of expression, Hajiyev said, adding that such actions go beyond the diplomatic ethics.

Police used force to disperse crowd after demonstrators gathered near where Kaya's vehicle was stopped.

"Hundreds of police set up a barricade between us and our citizens. No power can cut ties between us," she said on Twitter.

The Dutch said their decision to cancel Cavusoglu's flight for "security" and "public safety" came after the Turkish minister’s "threat" to impose sanctions on the Netherlands if the landing permit was revoked.

Turkey responded with a statement that requested to the charge d’affaires that "the Dutch ambassador who is on leave abroad [should] not return for a while”.

In a live broadcast later Saturday, Kaya confirmed she was blocked from entering the Turkish consulate in Rotterdam.

"We expect Netherlands to return to democratic values as soon as possible. Freedom of expression, movement, freedom of assembly, all of these have been suspended right now," Kaya said.

A Turkish diplomatic source, who spoke to Anadolu Agency on the condition of anonymity due to restrictions on talking to media, said Dutch diplomatic missions in Ankara and Istanbul were closed for security concerns.

Minutes after the Dutch cancelation was announced, President Recep Tayyip Erdogan described the move as a measure by “Nazi remnants and fascists”.

Addressing an inauguration ceremony in Istanbul, Erdogan said: “How will your country’s [diplomatic] flights come here now after not granting permission to our foreign minister?”

Several events planned for senior ministers from the Justice and Development (AK) Party in Germany have been canceled in recent days due to what Berlin cites as security grounds.