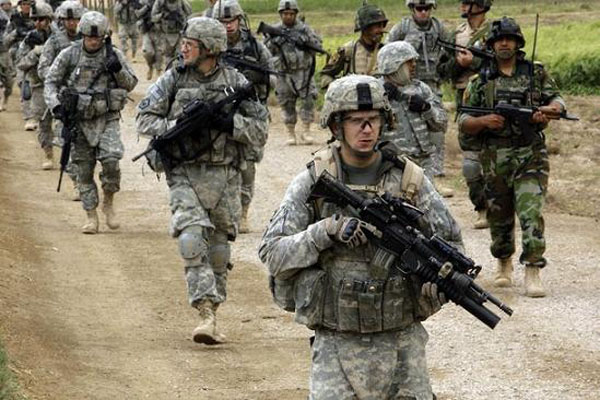 The U.S.-led coalition has air-dropped U.S. and allied Syrian forces near Tabqa in Raqqa province, expanding a campaign by the Syrian Democratic Forces (SDF) militias against Islamic State, the SDF said on Wednesday.

The operation aims both to capture the al-Tabqa area, across the Euphrates from the SDF's other main holdings, and to curb Syrian government advances in that direction, the SDF's Raqqa campaign said in a statement on social media.

The landing forces had seized four small villages in the area west of al-Tabqa and cut a main highway that links the provinces of Raqqa, Deir al-Zor and Aleppo, the SDF, a U.S.-backed alliance of militias said.

"American forces have conducted a landing operation for U.S. ground forces, along with special forces" from the Raqqa campaign, it said.

A local official familiar with SDF operations told Reuters the air-drop operation aimed to secure a crossing point for forces coming in boats across the Euphrates, which began arriving at dawn on Wednesday.

The official described it as "a pioneering step by the coalition and SDF in the framework of the war against Daesh," using the Arabic acronym for Islamic State.

With the help of air strikes and special forces operations from the U.S.-led coalition, the SDF is waging a campaign to encircle Raqqa city, Islamic State's most important holding in Syria.

The SDF, which includes the powerful Kurdish YPG militia as well as Arab groups, is fighting to isolate Raqqa ahead of an anticipated assault on the city, which Islamic State has used as a command node to plan attacks abroad.

The Kurdish-led alliance cut the last main road out of Raqqa earlier this month, narrowing in on the city from the north, east and west.

The only way out of Raqqa now is over the Euphrates that borders the city to the south, the Britain-based Syrian Observatory for Human Rights monitor has said.

Islamic State is losing ground to three separate campaigns in northern Syria - by the SDF, by the Russian-backed Syrian army and by Turkish-backed Syrian rebels.

The Syrian army and allied forces have made rapid gains east of Aleppo in recent weeks, edging toward the provincial border with Raqqa, close to al-Tabqa.

The head of the YPG militia said last week that the offensive to retake Raqqa would begin in early April, but a spokesman for the U.S. Pentagon said no decision had yet been made.