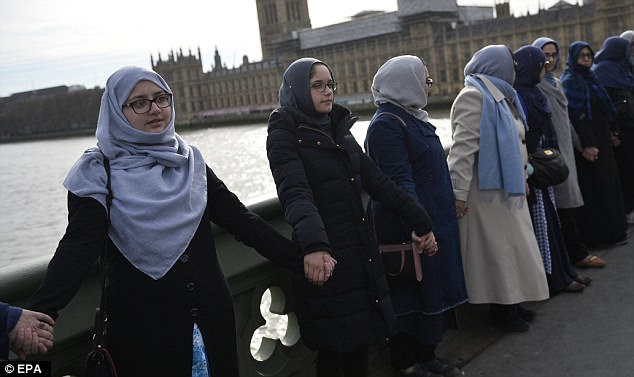 Muslim women stood hand-in-hand with others on Westminster Bridge in a show of solidarity with the victims of Wednesday's terror attack.

A group of women, who said they were wearing blue as a symbol of hope, stood holding hands for five minutes on Westminster Bridge as Big Ben chimed 4pm.

People from a range of backgrounds joined the event, organised by Women's March On London.

Three members of the public died after Khalid Masood sped along the bridge before storming the parliamentary estate and stabbing PC Keith Palmer to death.

Fariha Khan, 40, a GP from Surbiton, said: 'The feeling of what happened here on Wednesday was really strong.
'We thought of the ordinary people who were here and were mown down, standing here like this, it was very overwhelming.'

She was joined by fellow Ahmadiyya Muslims who said they wanted to add to the condemnation of the violent attack and stand defiant in the face of terrorism.

Sarah Waseem, 57, from Surrey, said: 'When an attack happens in London, it is an attack on me.

'It is an attack on all of us. Islam totally condemns violence of any sort. This is abhorrent to us.'

Being present for the demonstration shows people in the city are united in support of democracy, said Ayesha Malik.

The 34-year-old mother-of-two, also from Surrey, said: 'As a visible Muslim I think it was important to show solidarity with the principles that we all hold dear, the principles of plurality, diversity and so on.'

Londoner Mary Bennett said she was present to make a 'small gesture'.

The retired healthcare worker said: 'I am here to show that in a quiet way we continue to go where we like and do what we like in London.