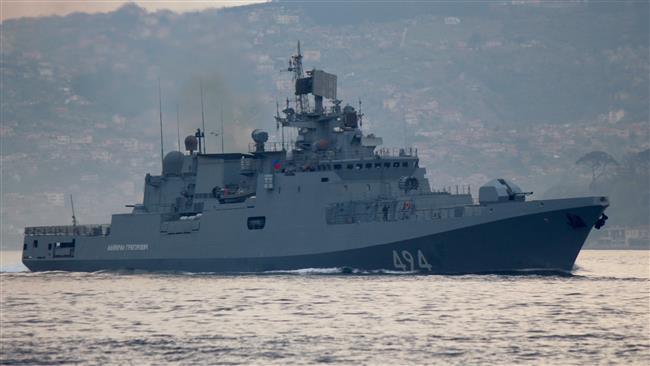 Russia has reportedly sent a missile-armed frigate to its naval base in Syria’s Mediterranean coastal city of Tartus following a recent US missile strike against an airbase in the Arab country.

An informed military-diplomatic source in Moscow told Russia’s TASS news agency on Friday that the Admiral Grigorovich, a Russian Black Sea Fleet’s frigate, was due to arrive in the Mediterranean later on the day.

“The Russian ship armed with cruise missiles Kalibr will visit the logistics base in Tartus,” the source said.

The 4,000-ton warship’s presence off Syria’s coast would depend on the situation, but “in any way it will last more than a month,” the source added.

The Russian ship was deployed to Syria after taking part in a joint exercise with Turkish ships in the Black Sea.

Early on Friday, US warships in the eastern Mediterranean launched a barrage of 59 Tomahawk missiles against Shayrat Airfield in Syria’s Homs Province, which Washington alleged was the origin of a suspected chemical attack on the town of Khan Shaykhun in Syria’s Idlib Province earlier this month.