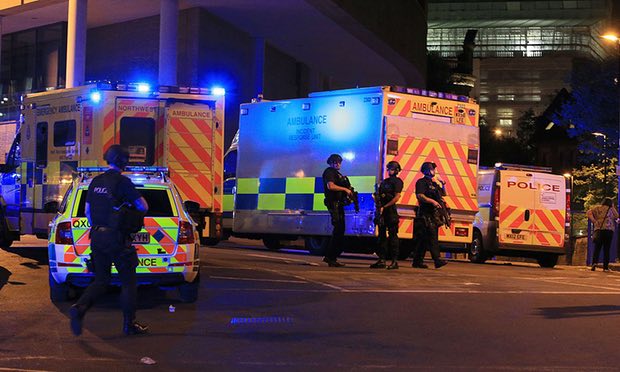 At least 19 people have been killed and 50 injured in what is being investigated as a suspected suicide bombing of a crowded pop concert in Manchester, the most deadly attack in Britain in a decade.

Axar.az reports refering The Guardian, the horror unfolded at around 10.30pm on Monday at the end of a concert by the American singer Ariana Grande, whose music is popular with children and teenagers.

The attack, which took place in the foyer area of the arena, left hundreds of people fleeing in terror, with young people at the concert separated from their parents in the chaos. It left carnage inside the concert venue, with medics describing treating wounds consistent with shrapnel injury.

One witness said he could see nuts and bolts strewn on the floor of the foyer after the attack, which could suggest a nail bomb was involved.

Britain’s prime minister, Theresa May, said: “We are working to establish the full details of what is being treated by the police as an appalling terrorist attack.

“All our thoughts are with the victims and the families of those who have been affected.” The attack came less than three weeks before Britain’s general election on 8 June and May has suspended her campaign, as have the Liberal Democrats and the Scottish National party. Labor is expected to follow suit.

The PM will chair an emergency meeting of the government’s crisis committee, Cobra, at 9am on Tuesday.

Initial examination of the scene around the explosion has prompted police to investigate whether a suicide bomber was responsible, the Guardian understands.

The hunt for those behind the attack involves the police counter-terrorism network and Britain’s domestic security service, MI5.

Police said that if confirmed as a terrorist attack, the death toll would make it the worst event of its kind in Britain since the 7/7 bombing in 2005, which hit London’s transport network, killing 52 people.