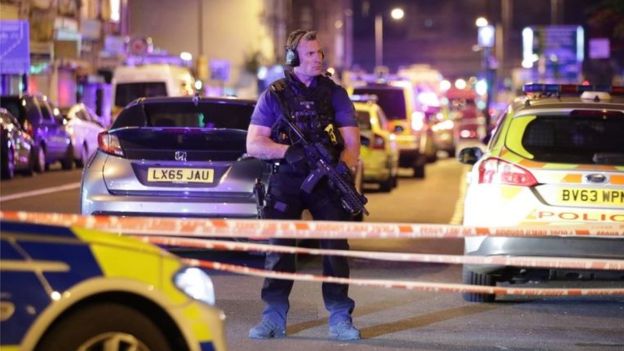 Several people were injured early Monday when a vehicle ran down pedestrians near a mosque in the northern area of the city, according to authorities.

Police said one suspect was arrested and officers and emergency service teams were on the scene near the Finsbury Park mosque.

Authorities did not provide any details of the incident but social media posts said a white male deliberately drove his vehicle into pedestrians.

Witnesses said the incident occurred as Muslims were leaving the mosque after the traditional night prayers in Ramadan called Tarawih -- observed nightly throughout the holy month.

The imam of the mosque, Muhammed Kozba, told Anadolu Agency the incident should be considered as a "terrorist attack."

Kozba said worshippers who were performing the prayer were "intentionally" targeted.

The imam did not specify a number of casualties but said there were injuries and deaths.

Abdulraman Aidroos, who witnessed the incident, said "a white British man" shouted, "I am going to kill Muslims" before driving his car into pedestrians. Aidroos said the driver killed one person and injured approximately 10 others but was caught by civilians and handed over to police.

Authorities have not yet confirmed any of the claims nor released details of any casualties.

The incident Sunday comes on the heels of two high-profile deadly terror attacks in the U.K.

A suicide bomber detonated a bomb after a concert in Manchester on May 22, killing 22 people. Approximately 120 others were injured in the blast.

On June 3, at least eight people were killed and 48 others injured when a van mowed down pedestrians on London Bridge and the attackers then stabbed victims at nearby Borough Market.