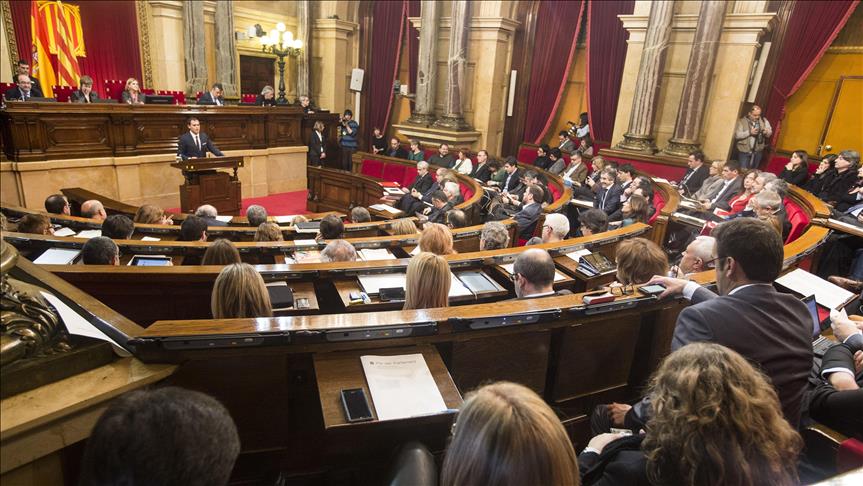 The Catalan government late Thursday passed a controversial referendum bill, which aims to guarantee an independence referendum for the northeastern region of Spain in the forthcoming weeks, despite the fact that the Spanish government and courts consider it to be illegal.

Axar.az reports citing Anadolu agency that, the tense debates over the bill in the Catalan parliament lasted 11 hours on Thursday, with opposition fiercely attacking the Catalan government for disrespecting democracy and the rule of law, both in the unconventional way the parliament passed the bill and because of its contents.

All opposition parties walked out before the vote, but separatists hold the majority of seats and the bill passed.

The separatist politicians celebrated after the vote, gathering to sing a hymn, as they will now officially declare the referendum for October 1.

Ines Arrimadas of Ciudadanos, leader of the official opposition in Catalonia, said the "illegal" bill not only lacked international support, but also violated the Catalans' rights.

"What you are doing is not only illegal, without the support of the majority and without international support, but it also infringes on the rights of Catalans," Arrimadas said during the debates.

The referendum law establishes an "exceptional judicial regime" that will prevail over any Spanish laws that come into conflict with the illegal independence referendum, and states it will safeguard those who participate in the vote.

The controversial law also defines the details of the referendum, such as the question, which will be: "Do you want Catalonia to be an independent state in the form of a Republic?". It also establishes that no minimum participation rate is required for the results to be valid.

However, the Spanish Constitutional Court is likely to strike down this law, just as it has with other laws passed in the Catalan parliament related to the independence referendum. The Constitutional Court considers the referendum illegal because unlike countries such as Canada or the U.K., Spain’s constitution simply does not allow for this type of vote.

"We will not allow the law to be broken in Spain," Deputy Prime Minister Soraya Saenz de Santamaria told reporters on Wednesday, adding that "Catalonia is getting closer to a dictatorship than a democracy".

Catalonia's president Carles Puigdemont fired back, calling the Spanish government a "threatocracy" and saying her remarks were an "insult to all Catalans, the majority of whom have legitimate aspirations".

Madrid’s central government announced that Prime Minister Mariano Rajoy would meet on Thursday with Pedro Sanchez of the Socialist Party to discuss the Catalan situation.