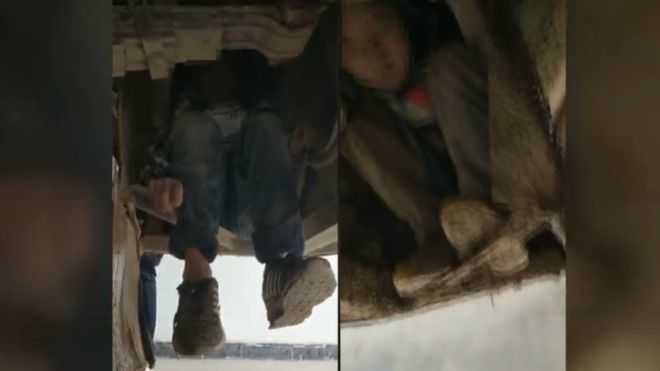 Pictures of two Chinese boys who travelled 80km (50 miles) in the undercarriage of a bus have sparked an online outcry about the welfare of the country's "left-behind" children.

Axar.az informs citing BBC that the two, who have not been named by state media, are from a poor village in southern Guangxi, and had been trying to reach their parents, who work in neighbouring Guangdong province.

They were reported missing on 23 November by their teacher, and found on the same day in the undercarriage of a vehicle at a bus station.

Pictures and video show the two boys caked with mud and clinging to the bottom of the bus.

According to the Southern Morning Post (Nanguo Zaobao), the boys were "around eight or nine years old" and were found by security workers when the vehicle stopped at a station en route.

They had travelled for about three miles along "steep slopes" and staff spoke of their "surprise" to find that they were unharmed.

"These children's bodies were really thin, so the undercarriage was a good hiding space," one worker told the paper.

Staff said the boys were reluctant to speak when questioned. But one staff member told Southern Morning

Post: "We finally came to understand that these two boys had been missing their mum and dad.

"They had hidden under the vehicle because they wanted, in vain, to find their parents."

Reports say that their relatives were informed and the children were picked up the same evening.

The incident has left China's online community shocked, and has been a talking point for thousands on the popular microblog Sina Weibo.

The pictures have been widely shared, and described by many users as "heartbreaking".

One says: "There are way too many young children in China now who are separated from their parents from a young age. Who is caring for them, and finding a solution to their problems?"

Another online user said it was a "tragedy in society", while a third called for more "attention to left-behind children".

These are children from rural areas whose parents have moved to cities to work - there are tens of millions across China.

Many live with their grandparents, or in extreme cases, by themselves. The two boys in this case had been boarding at their school.

The incident has led to many online users mocking the idea of the "China Dream": a Communist Party concept popularised by President Xi Jinping in 2013 which sets out a set of personal and national ideals.

One of these is for national poverty to be wiped out by 2020. One user says: "The rise of China relies heavily on migrant workers being exploited for their labour," receiving over 200 likes.

Another says that it is a "China Dream gone bitter" for these two "stupid children".

"Isn't the China Dream meant to be in the interest of these children?" they add.