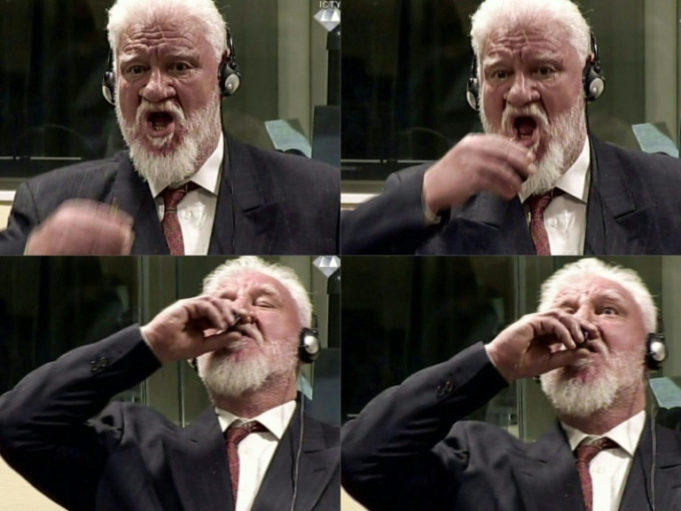 A U.N. tribunal that was stunned by the courtroom suicide of a Bosnian Croat war criminal said on Thursday it was working with Dutch investigators to piece together how he smuggled a fatal dose of poison into the high-security building.

Axar.az reports citing Reuters that, Slobodan Praljak, 72, died on Wednesday at a hospital in The Hague within hours of drinking a vial of liquid during the reading of his appeals judgment at the International Criminal Tribunal for the Former Yugoslavia.

Preliminary testing confirmed that the cause of death was “drinking a liquid that can kill,” spokesman Vincent Veenman of the public prosecutors office in The Hague said.

“We cannot yet say what that substance was. Further testing is needed,” he said.

A 5-member ICTY appeals bench upheld Praljak’s conviction on charges of crimes against humanity over persecution, murders and expulsions of Bosnian Muslims from territory captured by nationalist Bosnian Croats and the brutal imprisonment of wartime detainees. It also upheld his 20-year prison sentence.

The criminal investigation was immediately launched by Dutch authorities, who sealed off the ICTY courtroom to take evidence after Praljak told the court: “I have just taken poison”, denounced the verdict and slumped back in his chair.

Dutch prosecutors said the inquiry was focused on assisted suicide and violation of the Medicines Act. It will also try to determine how the poison was smuggled into the court.

Stricter procedures at the U.N. detention unit were adopted following the 2006 death of suspect Slobodan Milosevic, the former Serbian and Yugoslav president.

Milosevic, who died of a heart attack before his verdict on genocide and war crimes charges, had banned medication in his cell which may have worsened an existing heart condition.

Emotional reactions in Bosnia to Praljak’s death highlighted lasting division in the Balkans, where the court had aimed to bring reconciliation, but convicted war criminals are often revered as heroes.

About 1,000 nationalist supporters gathered to hold a Mass for Praljak, a former film and theater producer, in the Bosnian town of Mostar, known for the destruction of its iconic Old Bridge. Muslim victims of wartime violence welcomed his 20-year sentence and expressed hope it would deter future crimes.

Croatian newspapers on Thursday focused on a lack of security measures at the tribunal and the government’s rejection of the court’s finding that Croatia, now a member of the European Union, was also responsible for war crimes.

“A verdict with consequences for Croatia”, read a headline in the Novi List daily. “The appeals chamber found (former president Franjo) Tudjman and Croatia responsible,” it said.

“A horrific end for The Hague Tribunal”, read the front-page headline in the Jutarnji List daily, which like all papers ran a prominent photo of Praljak swallowing poison.

The dramatic events unfolded in the last minutes of the court’s final ruling before it closes next month after 24 years. [L8N1NL7ZT]

Previously, two defendants awaiting their ICTY trial, both Serbs, committed suicide by hanging themselves in their U.N. cells, according to court documents.

The ICTY indicted 161 suspects in all from Bosnia, Croatia, Serbia, Montenegro and Kosovo in connection with atrocities in the ethnic wars during the 1990s. Of the 83 convicted, more than 60 were ethnic Serbs.