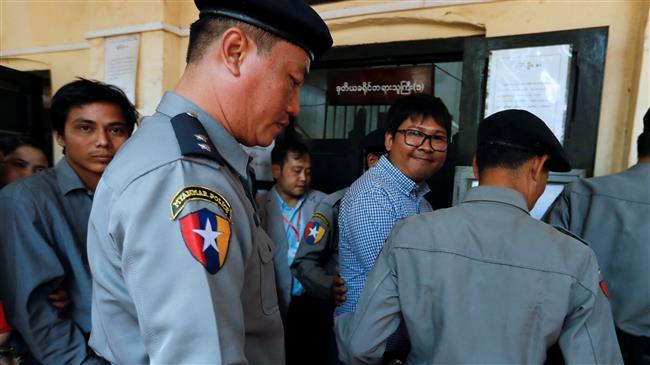 The United Nations human rights office has urged Myanmar to release two detained Reuters journalists who covered the state-sponsored crackdown against Rohingya Muslims in Rakhine state, a day after a district court rejected bail for them.

"We repeat the calls for their immediate release and for the charges to be dropped," UN human rights spokesman Rupert Colville said at a news briefing in Geneva on Friday.

The statement comes after a court on Thursday declined to grant bail in the case of the local journalists, Wa Lone and Kyaw Soe Oo.

The journalists were arrested last December during a meeting with two police officials over dinner for “possessing important and secret government documents related to Rakhine state and security forces.”

Earlier this year, they were officially charged for breaching a colonial-era law. The charges brought against them could carry a penalty of up to 14 years behind bars.

According to the colonial-era Official Secrets Act, anyone who "obtains, collects, records or publishes... any official document or information... useful to an enemy" will be punished. The act dates back to 1923, when Myanmar, then known as Burma, was a province of British India.

The journalists’ defense lawyer said on Thursday that the information in documents in their possession was publicly available.

Family members of the journalists, who were present at the court, told a news conference late last year that police may have fabricated a case for their arrest. They cited the two as saying that police had given “two rolled papers” to them at a restaurant before their arrest.

The UN human rights office also said on Friday that it was "alarmed at the serious erosion of freedom of expression in Myanmar."

The government has blocked the coverage of the military crackdown in Rakhine. The UN says nearly 655,000 Rohingya Muslims have fled the western state to Bangladesh since the bloody violence erupted last August.

Government troops have been committing killings, making arbitrary arrests, and carrying out arson attacks in Muslim villages in Rakhine.

Only in its first month, some 6,700 Muslims were killed in the crackdown described by the UN and prominent rights groups as an “ethnic cleansing campaign.” Doctors Without Borders said more than 700 children had also lost their lives.

The Rohingya have lived in Myanmar for generations but are denied citizenship, and branded illegal immigrants from Bangladesh. The UN has described the 1.1-million-strong Muslim community as the most persecuted minority in the world.