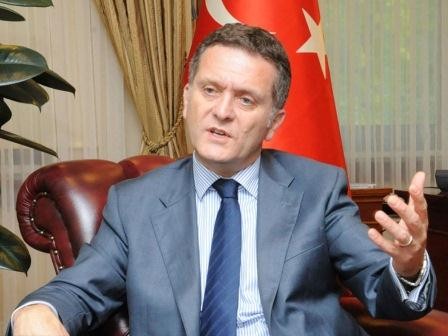 The issue on suspension of joint projects' implementation by Turkey and Azerbaijan in the context of the world economic crisis is not on the agenda, Turkey's Ambassador to Azerbaijan Ismail Alper Coshkun told April 22.

All joint projects of Turkey and Azerbaijan are being implemented according to schedule, he said.

"The construction of the Baku-Tbilisi-Kars (BTK) railway continues," noted Coshkun adding that the BTK railway will be commissioned in late 2016.

The work on construction project of the Trans Anatolian (TANAP) gas pipeline is going faster than planned, said the diplomat.

Coshkun said that the implementation of joint projects between the two countries is associated not only with the political will.

Thanks to these projects not only Turkey and Azerbaijan, but also close and meaningful neighboring countries will also be able to overcome the economic crisis, he noted.

The ambassador said that the trade and logistic relations are becoming more active thanks to the BTK railway that later will be successfully developed.

Turkey does not suppose to suspend the implementation of projects due to the economic crisis, on the contrary, the country will continue to work on new projects, said Coshkun.

Baku-Tbilisi-Kars railway is being constructed on the basis of a Georgian-Azerbaijani-Turkish intergovernmental agreement. It is expected to be commissioned in the second half of 2016.