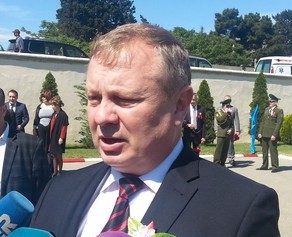 "Today we celebrate the greatest, meaningful and joyful holiday of the year. 71 years ago the largest and most severe warfare in the history of humanity. It touched all the peoples of the former Soviet Union. " The ambassador of Belarus in Azerbaijan Gennady Ahramovich stated to journalists on the occasion of the Victory Day. He noted the role of veterans in this victory: "We will never forget the feat of veterans, they gave us a bright future, the right to life."

The ambassador expressed hope that such wars are not repeated and all the conflicts were resolved peacefully.

Commenting on the Nagorno-Karabakh settlement G. Ahramovich noted that Belarus stands for the soonest resolution of the conflict by peaceful means: "The Nagorno-Karabakh conflict requires the efforts of the entire international community. I would like this conflict to be resolved in the foreseeable future with all international mechanisms. Belarus would like this very much, as a country which is very close to Azerbaijan. Because we know what war is. Therefore, we want to see this conflict resolved by peaceful means "as soon as possible.