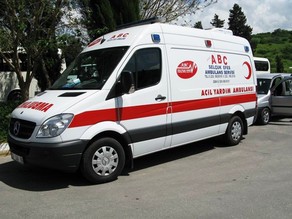 Four Turkish soldiers were killed and eight others were injured as PKK terrorists detonated explosives laid out on the road during military vehicle's passage in Şemdinli district of southeastern Hakkari province.

The explosion took place between Aktütün and Beyyurdu villages located on the border with Iraq.

Wounded soldiers were transferred to hospital by helicopters.

A large scale operation with air support was launched in the area.