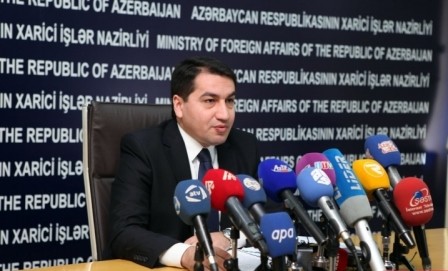 After the meeting of the presidents of Armenia and Azerbaijan with the foreign ministers of the OSCE Minsk Group co-chair countries in Vienna on 16 May, Armenia’s leadership and Foreign minister are playing a word game without the elementary diplomatic ethics aiming to distort the essence of the meeting," said Spokesman for Azerbaijani Foreign Ministry Hikmat Hajiyev.

According to him, Azerbaijani side in the meeting in Vienna, responded positively to the ceasefire proposal with the aim of laying the foundations for a serious and constructive negotiations: "The international community, including the OSCE Minsk Group believes that the status quo should be changed, Armenian troops should be withdrawn from the occupied Azerbaijani territories. There is an impression that the Armenian Minister of Foreign Affairs either did not understand the essence of the Vienna talks, or pretends. It is not coincidence that the head of the Armenian Foreign Ministry after a meeting in Vienna, speaking with unsubstantial statements aimed at internal demands, made no mention of a comprehensive peace process, which is the main purpose of the meeting in Vienna. The official Yerevan carries out destructive policy to stop the beginning of an inclusive political process to resolve the Nagorno-Karabakh conflict in June. The Armenian leadership rather than to prepare people to the peace, reinforces the rhetoric of hatred and chauvinism."

Hajiyev noted that after the meeting in Vienna, Foreign Minister of Azerbaijan Elmar Mammadyarov commenting on the statement by Russian Foreign Minister Sergei Lavrov said: "The talks in Vienna on a phased approach to the settlement of the conflict create the opportunity to start substantive negotiations.

These negotiations should begin as soon as possible, the results expected by the people of the region and the international community should be achieved. "