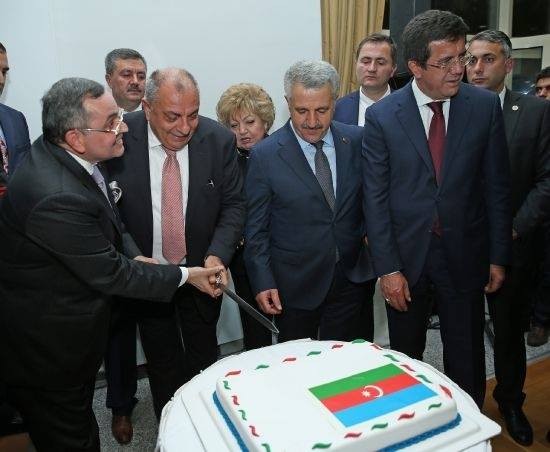 He made the remarks during a reception organized by Azerbaijan’s embassy in Ankara on the occasion of the 98th anniversary of the Azerbaijan Democratic Republic.

The presidential advisor called on the international community to intensify efforts towards the liberation of the Azerbaijani territories.

Addressing the event, Turkish Deputy Prime Minister Tugrul Turkes said that Turkey is determined to develop its ties with Azerbaijan in all areas.

"Turkey closely followed the recent escalation in Nagorno-Karabakh provoked by Armenia," said the deputy PM, noting that Turkey stands ready to provide all the necessary support to Azerbaijan.

“Turkey has always stood and will continue to stand by the Azerbaijani brothers, in times of peace and trouble,” he said.

Answering questions from reporters, Minister of Transport, Maritime and Communication Ahmet Arslan said their ambition is to make the Baku-Tbilisi-Kars railway ready for us by early 2017.

In his turn, Azerbaijani Ambassador to Turkey Faiq Baghirov expressed content with the level of friendly relations between the two countries.