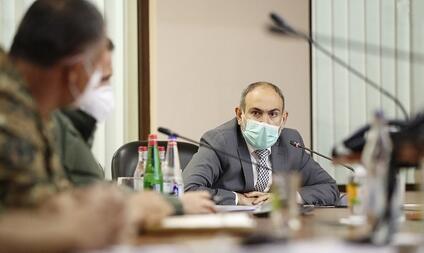 Armenian Prime Minister Nikol Pashinyan recently held a meeting with the leadership of the armed forces over the events on the border with Azerbaijan.

Axar.az reports that, the meeting was attended by a military command led by Defense Minister David Tonoyan and Chief of General Staff Onik Gasparyan.

The meeting discussed the situation on the border and the prospects for its development, noting that the situation is currently under control. However, it is clear from the photos spread by the Armenian media that N. Pashniya, as well as the army leadership, are very anxious.

Faced with crushing blows from Azerbaijan, the country's Ministry of Emergency Situations has announced that the population living along the border will be evacuated.

It should be noted that although the leadership of the Armenian army announced that 4 servicemen were killed and 5 were wounded, Armenian citizens wrote that the losses were many times higher.