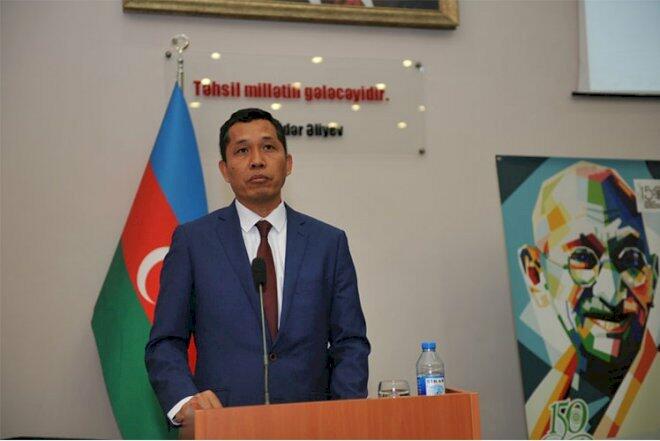 Axar.az reports that according to the statement of the Indian Embassy of Azerbaijan, the reorganization has delivered many positive developments in the Union Territory and has achieved its objective of improving good governance and delivered all-round socio-economic developments to the people of the union territories.

He said that during the last one year, the efforts of the Government have made substantial positive changes to the lives of the people in the region.

According to the Ambassador, last year legislation has completely integrated the erstwhile state of Jammu and Kashmir with the rest of India.

“By this, all the laws which were applicable in other parts of India which were meant to protect and promote social, economic and political rights of under-privileged sections including women and children have become applicable to the Union Territory of Jammu and Kashmir. This has not only empowered women and children in the Union Territory but it has also brought about transparency and accountability in Governance, which has benefited the whole population. In fact, over 100 Acts of the Union Territory of Jammu and Kashmir have been changed to bring them relevant to contemporary and modern times. To demonstrate the commitment of the Government of India to bring development to J & K, 36 Union Ministers visited over 50 locations of J& K and inaugurated 200 projects in the last one year.”

On some specific positive developments resulting from the reorganisation, the Ambassador said that the application of the Right to Free and Compulsory Education Act 2009 has ensured that children of J&K have the right to be educated till the age of 14.

“The Juvenile Justice (Care and Protection of Children) Act, 2015 and the Protection of Women from Domestic Violence Act, 2005 to J&K have empowered women and protecting children from exploitation and harm. For the first time, elections to Block Development Councils, which is Tier-II of what we call Panchayati Raj (Local Self-Government), were held on AnchorAnchor24 October 2019. The election witnessed voters turn out of over 98% and women were elected in the seats reserved for them and this has enabled them to play a role in mainstream politics. The functions and finances of the Panchayats have also been strengthened in the last year. This includes the transfer of over US $ 200 million to the Panchayats in the last one year.”

According to the Ambassador, the government has also introduced a participatory programme in AnchorAnchorNovember 2019 called ‘back to the village’ programme. Through this programme, the Government visited every Panchayat and spent two days and a night to discuss various developmental programmes.

“It also collected feedback from the people in the villages through this process. As a result, over 20,000 developmental works which are necessary to be undertaken have been identified by the people, out of which 7000 have already been executed. The first e-National Agriculture Market (e-NAM) platform of J&K was also inaugurated recently. To help the apple farmer, a unique market intervention scheme for Kashmiri apples was introduced. This entails procurement of apples from 5 designated locations operated by the National Agricultural Cooperative Marketing Federation of India. Through this programme, 15000 MTs of apple worth around the US $ 10 million have been directly procured from the growers until AnchorAnchorJanuary 2020 and the money obtained from the sale were paid to the apple growers through direct benefit transfer. To promote Kashmiri saffron, India International Kashmir Saffron Trading Center has been constructed at Pampore under National Saffron Mission and this centre will facilitate collection, processing, packaging and e-Auction of Kashmir saffron.”

The Ambassador said to encourage investment from all over the world, Jammu and Kashmir organised the first pre-Summit meet of Global Investors Summit in New Delhi in AnchorAnchorJanuary 2020. During this, 14 focus sectors to boost manufacturing and employment generation were promoted:

“Investment roadshows have also been organised across Indian cities which have resulted in the signing of MoUs worth over the US $ 1.8 billion. Firstly, to provide employment to the youth, the J& K Government has already advertised 10,000 posts for accelerated recruitment at all levels in the first phase and plan for additional 25,000 more jobs in the future. To boost employment opportunities and encourage entrepreneurship among the technically qualified youth, two IT parks have been planned to be set up. Twelve start-ups have been selected for product research, development and marketing. The government has also established 50 new educational institutions with 25000 vacancies which are the largest addition in 70 years. A new health infrastructure worth the US $ 1 billion which include 2 new All India Institute for Medical Science, 7 new medical colleges, 5 new nursing colleges and a state cancer institute is being planned. Further,1400 medical/paramedical seats have been added for medical education. Additionally, there has been a four-fold increase in the number of students from Kashmir with 500,000 students availing different scholarship schemes of the Government in the last year. The Government will also provide two-month internship to 500 students of J& K in premier institutions like Indian Institutes of Technology and Indian Institutes of Science Education and Research. It has also accorded sanction to establishment of two Centers for Invention, Innovation, Incubation & Training in J& K.

In the past year, 200,000 houses for slum development and rehabilitation have been approved. Additionally, for the first time in 70 years, 300,000 households have been provided access to electricity for the first time and 293,000 household water connections. 800,000 student health cards for school children have been issued. The first phase of One Nation One Room Card Scheme to provide entitled food grains under the National Food Security Act has been launched.

To engage with the youth and promote sports, the first-ever Khelo India Winter Games was held in Gulmarg in AnchorAnchorMarch 2020 which saw the participation of over 900 athletes from different parts of India. Besides this, different sports activities in J & K during the year saw the participation of over 500,000 youth and 126,000 youth received coaching. The Government is also planning to construct an indoor sports complex in every district, playground in every Panchayat and international facility in Jammu and Srinagar.”

On the fight against COVID-19, Ambassador said that J & K is one of the best performing states in India with almost 4 times more testing rate as compared to the average in India.

“It was one of the among the State/UT to set up COVID-19 hospitals and it presently has 17 dedicated hospitals with 60,000 new beds including 20,000 ICU beds and 2500 isolation beds with oxygen facilities. Srinagar was among 16 districts selected in India for best practices to tackle COVID-19. The Government has sanctioned the US $ 47 million as a relief package to help those adversely affected and has also assisted in the return of 250,000 residents of J& K who were stranded across the country and abroad.”