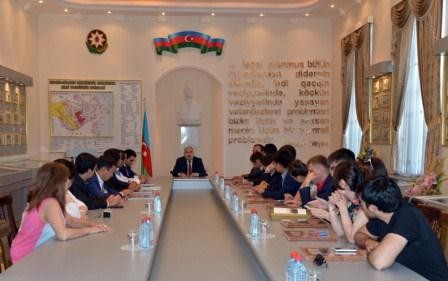 Huseynov said that the military aggression of the Armenian armed forces against Azerbaijan resulted in the occupation of 20 percent of Azerbaijani territories - Nagorno-Karabakh and seven adjacent administrative areas. “More than one million Azerbaijanis became refugees and IDPs. The UN Security Council adopted four resolutions demanding the immediate liberation of the occupied Azerbaijani territories, return of refugees and internally displaced persons to their homelands,” he said.

Huseynov noted that OSCE, PACE, Organization of Islamic Cooperation and other international organizations condemned the aggressive policy of Armenia.

He emphasized that the Nagorno-Karabhakh conflict posed a threat not only to the South Caucasus region, but also to the whole world as Armenia uses the occupied Azerbaijani territories for transiting narcotic substances and preparing terrorist groups in different countries.

Huseynov also pointed out that the leadership of Azerbaijan carries out tremendous work to meet the needs of refugees and internally displaced persons.