Presidents' meeting to be held at the Constantine Palace 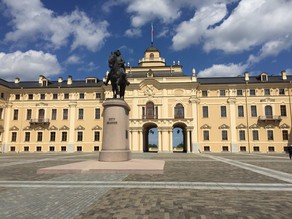 Today’s meeting between Azerbaijani President Ilham Aliyev and Armenian President Serzh Sargsyan will be held at the Constantine Palace in St. Petersburg. Report informs OSCE Minsk Group's US Co-chair James Warlick who arrived at the meeting place wrote on his Twitter page.

President of Russia Vladimir Putin in St. Petersburg will discuss with settlement of the Nagorno-Karabakh conflict with the Presidents of Azerbaijan and Armenia Ilham Aliyev and Serzh Sargsyan. According to the Russian president assistant Yury Ushakov, it is assumed that at the beginning Putin will meet separately with Aliyev and Sargsyan, and then the three presidents will hold talks together.

Ushakov said that the meeting scheduled for the afternoon.