Sargsyan and Ohanyan in serious disagreement 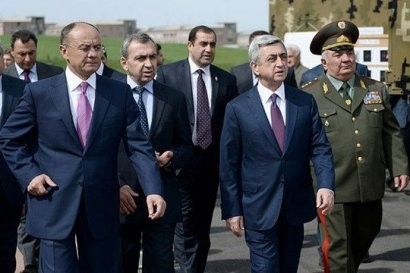 A tense conversation took place between President Serzh Sargsyan and Defense Minister Seyran Ohanyan after the resignation of high-ranking generals of the Armenian armed forces and corruption scandals, said the Armenian newspaper Zhoghovurd.

According to the newspaper, Sargsyan told Minister Ohanyan approximately the following: with respect to Azerbaijan's factor he should not be dismissed yet, however, the minister must 'purge himself from sin'. That is, Seyran Ohanyan remains the defense minister for his resignation not to be a propaganda tool in the enemy' hands.

"By our information, Ohanyan said in privy speaking about his future that he was not going to resign, if he works badly, let the president send him to resignation," the newspaper reads.

In May, Armenia’s General Mels Chilingaryan and Colonels Armen Markaryan and Mher Papyan were arrested.

They are suspected of various wrongdoings. In one case – accepting poor quality supplied goods, in another case – according to preliminary data, procurements with exaggerated expenses.

Besides, head of the second department of Mashtots military commissariat Lieutenant Colonel Shant Avetisyan was caught red-handed while taking $5,000 as a bribe.