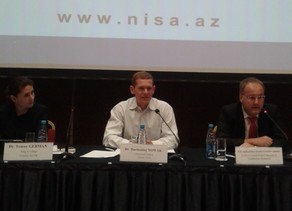 On June 29, Ambassador of Romania to the Republic of Azerbaijan, H.E. Mr. Daniel Cristian Ciobanu, delivered a speech at the summer session of NATO International School of Azerbaijan within the panel “NATO partnerships and indivisibility of security in the Euro-Atlantic area as a common response to regional security challenges”.

It was told in the Romanian Embassy to Azerbaijan, the other panelists were Dr. Bartek Nowak from Transatlantic Academy and Dr. Tracey German from King’s College in London.

In his speech Ambassador Ciobanu underlined that Romania is fulfilling for the fourth time in a row the mandate of NATO Contact Point Embassy in the Republic of Azerbaijan. This is the only current case of such a long involvement of a country as a Contact Point Embassy. In this capacity Romanian Embassy managed to build excellent and productive ties with Azerbaijani authorities and non-governmental organizations, contributing to raising public awareness about the Alliance and strengthening NATO-Azerbaijan political dialogue and cooperation.

Ambassador Ciobanu said that at the Warsaw Summit (8-9 July 2016), NATO will deliver important decisions to boost security in and around Europe. In order to safeguard the security at home, North Atlantic Alliance must also project stability beyond its borders. NATO is facing a very complex and fluid security environment with many challenges. North Atlantic Alliance is responding with strength, resolve and readiness. Modern challenges require a modern Alliance.

Ambassador Ciobanu highlighted that relations between NATO and Azerbaijan are developing strongly and they have a strategic value. NATO-Azerbaijan partnership is based on active political dialogue and substantial practical cooperation.

Azerbaijan has a pivotal role to play in increasing European energy security and has, in the same time, huge opportunities in the field of freight transport. It’s important that NATO and its partners maintain strategic awareness regarding the new risks that could affect the security of energy infrastructure and vital energy supplies. As a NATO and EU member, Romania is determined to further promote and actively support Azerbaijan’s efforts to enhance its relations with the European and Euro-Atlantic institutions.