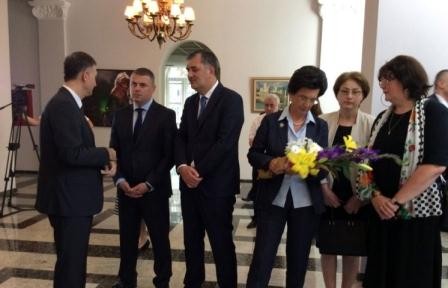 The event was attended by Georgian Foreign Minister Mikheil Janelidze, representatives of the Georgian government and diplomatic corps accredited in the country, political party leaders, representatives of international organizations and Turkish businessmen functioning in Georgia.


The guests signed the book of condolence opened at the embassy in honor of those killed in the terrorist attack in Istanbul.


Addressing the event, Turkish Ambassador to Georgia Zeki Levent Gumrukcu expressed gratitude to Georgian citizens for the remembrance of the terror victims.


“Terrorism again showed his true colors. Treacherous, coward enemy again committed a terrorist act. From the beginning, we have been saying that a terrorist has no religion and identity. No country is immune from terrorism,” said the ambassador, calling for a mobilized struggle against terrorism.

He said they felt the care of Georgian authorities from the very moment of terrorist act.

“I hope that it will be the last terrorist act and we will move towards the unity. Today, the Georgian and Azerbaijani society shared our grief. Tbilisi TV Broadcasting Tower was illuminated in the colors of the Turkish flag yesterday. We don't feel lonely and are looking to the future with hope. It is impossible to scare the Turkish people. I’m sure that we will eradicate terrorism,” the ambassador said.