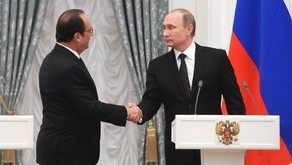 "Putin informed Hollande, as head of a state co-chairing the OSCE Minsk Group on Nagorno-Karabakh settlement, of the results of trilateral talks with presidents of Azerbaijan and Armenia on June 20 in St. Petersburg," the press service said in a statement.


"The Russian and French leaders expressed hope that agreements reached at that meeting would facilitate progress in the Karabakh peace process. The leaders agreed to continue joint efforts in the framework of the OSCE Minsk Group in this important direction," the statement said.


According to the document, Putin and Hollande also discussed various issues on the global agenda emphasizing the efforts aimed at resolving the Ukrainian crisis.