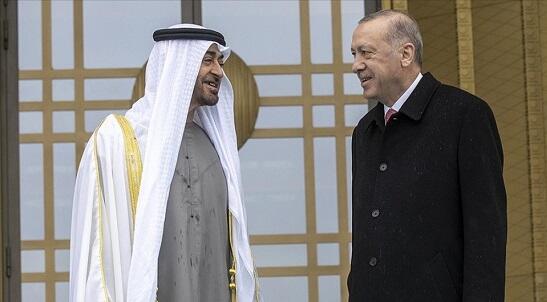 The Crown Prince of Abu Dhabi, Deputy Commander-in-Chief of the Armed Forces Mohammed bin Zayed al-Nahyan met with Turkish President Recep Tayyip Erdogan in private and with the participation of delegations.

Axar.az reports that later, President Recep Tayyip Erdogan and the Crown Prince signed documents on cooperation between Turkey and the United Arab Emirates.

The breadth and relevance of the signed documents give grounds to say that Turkish-UAE relations are entering a new stage of development. According to an initial statement issued after the signing of the documents, the United Arab Emirates has established a financial fund of $ 10 billion to invest in Turkey.

Earlier, it was reported that the UAE Crown Prince Mohammed Bin Zayed al-Nahyan will visit Turkey to meet with Erdogan and a $ 100 billion document will be signed between the two countries.