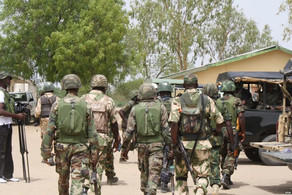 A gang of gunmen killed at least 15 people at a mosque in Zamfara state in northwestern Nigeria, residents said today.

The armed robbers came on motorcycles carrying guns and went straight to the mosque and started shooting at us sporadically,” resident Amimou Mustafa said.

Another resident, who asked not to be named, said the attack took place at around 14:00 local time, adding that many others were injured.

A Zamfara state police spokesman did not immediately respond to residents’ reports.