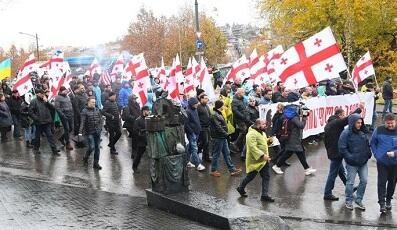 A protest action started in front of the office of "Georgian Dream" with the demand to send ex-president of Georgia Mikheil Saakashvili abroad for treatment.

Axar.az reports that members, supporters, leaders and other opposition members of the United National Movement Party also participate in the action.

According to Levan Khabeishvili, one of the leaders of the party, their demand is to protect the life and health of ex-president Mikheil Saakashvili.

According to the leaders of "National Movement", Mikheil Saakashvili's health is very serious and it requires taking urgent steps. The participants of the action also noted that today's action has no political demand and their goal is only to save the life of ex-president Mikheil Saakashvili.

It should be noted that a large number of law enforcement officers were mobilized to the scene.