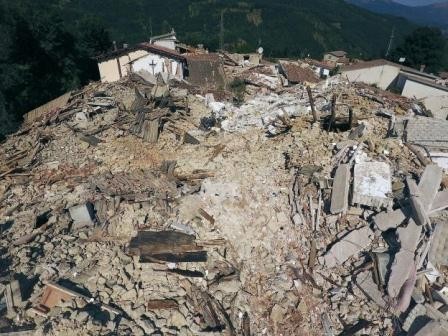 Hopes of finding more survivors from Italy's powerful earthquake faded on Friday, with the death toll rising to 278 and the rescue operation in some of the stricken areas called off.


Three days after the quake struck the mountainous heart of the country, sniffer dogs and emergency crews continued to scour the town of Amatrice, which was leveled in the disaster, but there was no sign of life beneath the debris.


"Only a miracle can bring our friends back alive from the rubble, but we are still digging because many are missing," town mayor Sergio Pirozzi told reporters, saying, around 15 people, including some children, had not been accounted for.


In nearby villages, such as Pescara del Tronto, rescuers pulled out after all the inhabitants had been accounted for.

Italy plans to hold a state funeral for around 40 of the victims on Saturday, which will be held in the nearby city of Ascoli Piceno. A day of national mourning was announced, with flags due to fly at half mast around the country for the dead, who include a number of foreigners.


The civil protection department in Rome said 388 people were being treated for injuries in hospitals, and 40 of them were in critical condition. An estimated 2,500 people were left homeless by the most deadly quake in Italy since 2009.


Survivors with nowhere else to go are sleeping in neat rows of blue tents set up close to their flattened communities. The government has promised to rebuild the region, but some local people feared that would never happen.

"I'm afraid our village and others like it will just die. Most people don't live here year round anyway. In the winter time the towns are virtually empty," said Salvatore Petrucci, 77, who came from the nearby hamlet of Trisunga.

"We may be the last ones to have lived in Trisunga."


More than 1,050 aftershocks have hit the area since the 6.2 magnitude quake early on Wednesday, bringing fresh damage to structures still standing. These included a bridge leading to Amatrice, which had to be closed on Friday, further complicating the rescue operation.


The original quake was so strong that the town nearest the epicenter, Accumoli, sank by 20 cm (7.87 inches), according to Italy's geological institute.