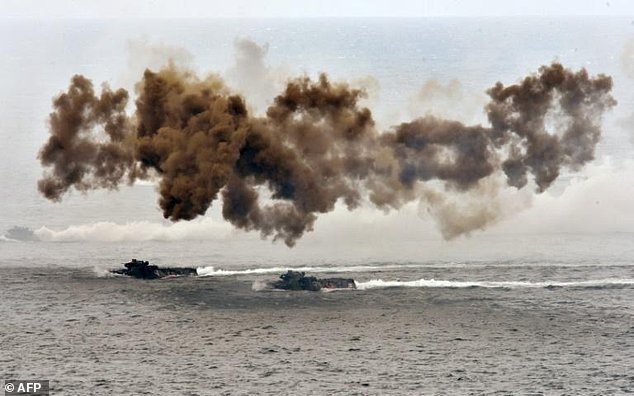 Military forces in Taiwan have today simulated a 'Chinese invasion' as part of live-fire war games amid rising tensions with Beijing.

The drills held annually are Taiwan's biggest military exercise and mock up a scenario in which Chinese troops launched an amphibious assault.

The nation is boosting its firepower to counteract the risk of military threat from China.

The simulated invasion took place today on the outlying Penghu Islands which sit in the strait that separates Taiwan from China.

Attack helicopters fired missiles and jet fighters including eight F-16s dropped bombs in the waters south of the archipelago to 'repel the enemy.'

Taiwan's defence ministry has warned of rising military threat from China, which still sees Taiwan as part of its territory.

China has said in the past that it should be unified with Taiwan, by force if necessary.

The island has been boosting its firepower to counteract the possibility of an attack. It has launched its first ever home-grown submarine project and has built a new generation of jet trainers.

President Tsai Ing-wen presided over the drills and emphasised the importance of building up Taiwan's defence industry.

She said while overseeing the exercise: 'When Taiwan shows its determination to take the road of defensive autonomy, it is putting on a display to the world of our determination to protect our home and land.'

Relations with China and Tsai Ing-wen have deteriorated as she is seen as pro independence. Tsai refuses to acknowledge that both sides belong to 'one China'.

Taiwan is expected to continue the war games for the next week.