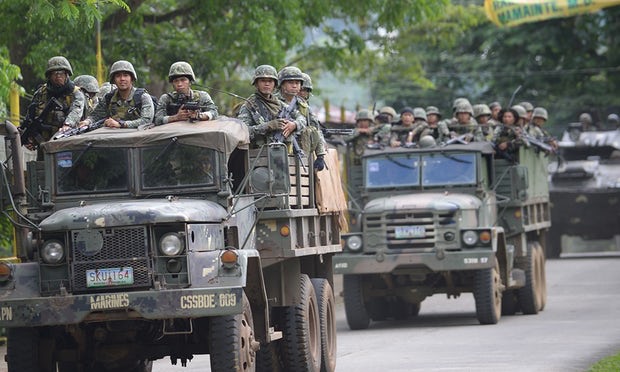 Fears are growing that a violent attempt by local militants to seize a city in the island of Mindanao, in the southern Philippines, marks the beginning of a wider bid by Islamic State (Isis) to open a new south-east Asian front in its campaign of global jihad.

In one incident, police discovered the bodies of eight workmen on the outskirts of the city. Some of the men’s hands were tied and most had been shot in the head. A sign saying “munafik” (traitor) was attached to one of the bodies.

A police spokesman said the men were targeted during an attempted evacuation of Marawi because they were unable to cite verses from the Qur’an. The official death toll after nearly a week of fighting stands at 85, but may be much higher. Many residents of Marawi, a city of about 200,000 people, have fled. Although the army has poured in ground troops, helicopter gunships and rocket batteries, fierce fighting continues.

The militant force is known as the Maute after two brothers, Omar and Abdullah Maute, who reputedly ran a criminal gang in nearby Butig before turning to armed insurrection. The trigger for the uprising was a failed attempt to arrest Isnilon Hapilon, the Maute’s leader.

Hapilon was previously second-in-command of the al-Qaida linked Abu Sayyaf terrorist group based in Basilan in the Sulu archipelago. It is notorious for bomb attacks, beheadings of western hostages, and its connections to Jemaah Islamiyah, which carried out the 2002 Bali bombings.

Like Abu Sayyaf, other militant Islamist groups in Mindanao such as the Bangsamoro Islamic Freedom Fighters (Biff) and Ansar Khalifa Philippines have recently joined forces with the Maute and its shadowy Isis backers.

But the Marawi siege and in particular, the hostage-taking and execution of civilians, have raised fears the Maute are deliberately emulating Isis tactics and doing its bidding to win recognition as its main south-east Asian affiliate. If so, it may be working. Isis’s Amaq news agency last week claimed responsibility for the siege.

Fears of an expanding Isis front in Mindanao have been stoked by government claims that Islamist militants from Malaysia, Indonesia and Singapore are flocking to the Maute banner. In a report to congress last week, Rodrigo Duterte, the president of the Philippines, blamed foreign jihadis for bolstering the rebellion and imposed martial law in the south of the country.

“Isis is already here,” Duterte said, adding that its aim was to create a new caliphate or “wilayat” (province). “Considering the network and alliance-building activities among terrorist groups, local criminals and lawless armed men, the siege of Marawi city is a vital cog in attaining their long-standing goal: absolute control over the entirety of Mindanao.”

Duterte’s unabashed support for violent methods, including torture, rape and extrajudicial killings since his election in 2016, may be partly to blame for the escalating Mindanao crisis.

His neglect of the Bangsamoro peace process promoted by his predecessor, Benigno Aquino, has also strengthened the hands of extremists who say the island will never get a fair deal from Manila.

Also at fault are the US and China, which are cynically jockeying for control and influence in the Philippines and in adjacent, disputed areas of the South China Sea.

Implicitly endorsing Duterte’s methods, Donald Trump praised the Philippines leader and invited him to the White House. China, Russia and Japan are also busily courting him. But while the great powers vie for geopolitical advantage, in Mindanao, the terrorists advance.