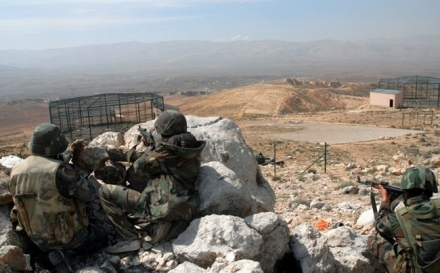 Lebanon’s Hezbollah and the Syrian army are seeking a new route for a convoy of Islamic State fighters and their families bound for the jihadists’ stronghold in eastern Syria, a commander in the military alliance backing Syria’s government said.

Axar.az reports citing Reuters that, the convoy of 17 buses carrying about 300 lightly armed fighters and 300 civilians has been stuck in Syria’s eastern desert since Tuesday, with a U.S.-led coalition using air strikes to stop it from entering Islamic State territory.

“Work is under way to change the course of the convoy for a second time,” the commander said.

The fighters traveling on the buses surrendered their enclave straddling Syria’s border with Lebanon on Monday in a truce deal that allowed them to join their jihadist comrades on the other side of the country.

It angered both the U.S.-led coalition, which does not want more battle-hardened militants in an area where it is operating, and Iraq, which sees them as a threat because the convoy’s proposed destination of Al-Bukamal is close to its own border.

The Syrian government of President Bashar al-Assad, helped by Russia and Iran-backed militias including Hezbollah, is fighting Islamic State as it pushes eastwards across the desert.

A Britain-based war monitor, the Syrian Observatory for Human Rights, said dozens of the Islamic State fighters had left the stranded convoy in an attempt to reach IS-held Deir al-Zor province by themselves.

The commander in the pro-Assad military alliance denied news reports that said a hundred of the jihadists had already reached Islamic State territory there.

The coalition has sworn to continue monitoring the convoy and disrupting any effort it makes to cross into jihadist territory, but will not bomb it directly because it contains civilians.

It has asked Russia to tell the Syrian government that it will not allow the convoy to move further east towards the Iraqi border, according to a statement issued late on Friday.

On Wednesday, the coalition said its jets had cratered a road and destroyed a bridge to stop the convoy progressing, and had bombed some of the jihadists’ comrades coming the other way to meet it.

Hezbollah and the Syrian army on Thursday changed the route of the convoy from Humeima, a hamlet deep in the southeast desert, to a location further north, but coalition jets again struck near that route, the commander said.

“It was considered a threat, meaning there was no passage that way,” the commander said. On Friday, coalition jets ran mock air raids over the convoy, the commander added.

“It caused panic among the Daeshis. The militants are scared the convoy will be bombarded as soon as it enters Deir al-Zor,” the commander said, using a plural form of the Arabic acronym for Islamic state to refer to its fighters.