Joint military exercises will be held in our country - Video 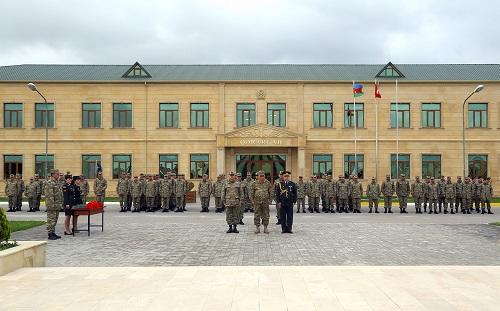 According to the Agreement on Military Cooperation between the Republic of Azerbaijan and the Republic of Turkey, the “Mustafa Kemal Ataturk - 2019” Azerbaijani-Turkish joint tactical live-fire exercises will be held in our country from May 1 to 3.

A solemn welcoming ceremony was held for military personnel of the Turkish Armed Forces arrived in Azerbaijan to participate in the exercises.

At first, the ceremony participants laid flowers to the bust of national leader Heydar Aliyev, installed on the territory of the military unit, and paid tribute to the memory of the Great Leader and martyrs who died in the struggle for independence and territorial integrity of our Fatherland, with observing a minute of silence.

The main objective of the exercises is to achieve the coordination of interoperability between the military units of Azerbaijan and Turkey, by preparing joint headquarters plans, increasing the level of combat readiness of military personnel and developing their skills in conducting joint operations, as well as maintaining mutual relations and mutual understanding of the servicemen of the two countries at a high level.

The joint exercises will involve military personnel, armored vehicles, artillery mounts and mortars, combat and transport helicopters of the Air Force, as well as Air Defense units and Anti-Aircraft Missile units of the armies of the two countries.

During the preparatory period, it is planned to hold a number of cultural events for the Turkish servicemen.