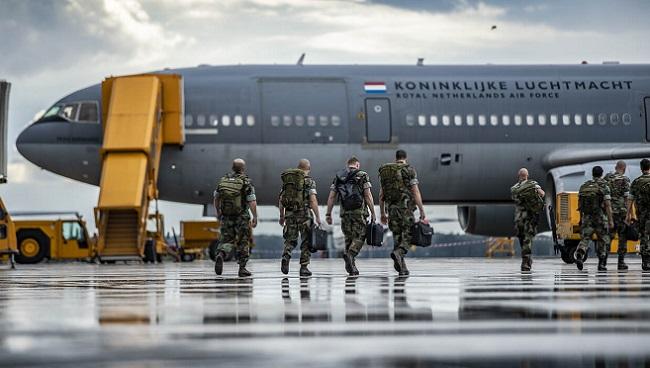 The Netherlands is sending additional military personnel to the Caribbean to bolster disaster relief for the Bahamas. On Saturday afternoon, 76 marines departed from Eindhoven Air Base to Sint Maarten onboard a Royal Netherlands Air Force KDC-10 transport aircraft.

Axar.az reports citing foreign media that the marines are part of 21 Raiding Squadron of the Marine Corps. They form the Marine Spearhead Task Unit that is on permanent stand-by for rapid deployment in the Netherlands or abroad.

Together with the French and the Germans.

Including the extra marines, approximately 550 Dutch servicemen and women of the Netherlands navy, army, air force, and marechaussee will be deployed for disaster relief in the Bahamas.
Everything on board
HNLMS Johan de Witt is an amphibious transport ship. It is a port, airfield and depot rolled into one. It has a large deck for vehicles and relief supplies, army medical personnel, and an internal dock where boats can sail in and out. In addition, there are 2 Cougar transport helicopters onboard from Defence Helicopter Command, a unit of marines with 2 FRISC boats and 4 landing craft, as well as soldiers from the Engineer Corps, an army unit specialized in civil-military operations, and 2 teams of specialist divers.