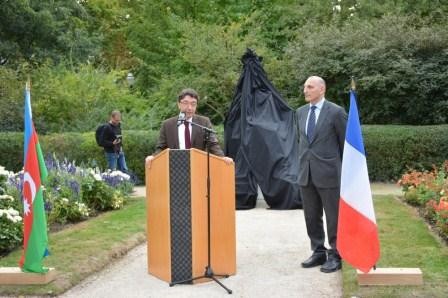 A ceremony to unveil a monument to outstanding Azerbaijani poet Mahsati Ganjavi has been held in the French city of Cognac. The event was organized by the Heydar Aliyev Foundation.

Addressing the event, Cognac Mayor Michel Gourinchas highlighted relations between France and Azerbaijan. The mayor said the unveiling of the monument and the opening of Orangerie Hall in the city will contribute to developing bilateral relations.

Azerbaijani ambassador to France Elchin Amirbayov provided an insight into the country`s “rich” history and culture. He drew the audience`s attention to the projects carried out by the Heydar Aliyev Foundation under leadership of first lady Mehriban Aliyeva across the world, in particular in France.

The ambassador hailed a friendship agreement signed between Tovuz and Cognac cities, saying it plays an important role in developing bilateral ties. Amirbayov also highlighted the life and activity of Mahsati Ganjavi, saying she advocated women`s rights and gender equality back in the 12th century. The ambassador said the 900th anniversary of works by Mahsati Ganjavi was celebrated by UNESCO in 2013, adding that a hall named after the poet opened at the University of Upper Alsace in Mulhouse through support of the Heydar Aliyev Foundation.

The event participants thanked Salhab Mammadov and Ali Ibadullayev who made the monument.

The ceremony continued with a cocktail reception and performance of Azerbaijani folk music at Cognac Mayor`s office.