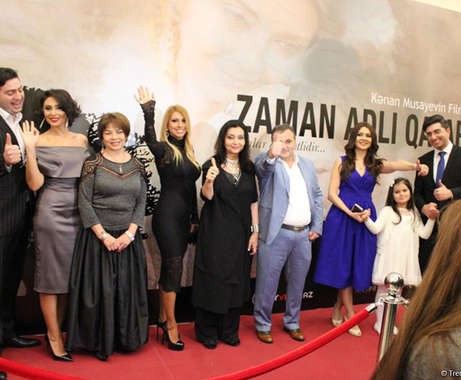 Addressing the opening ceremony, famous actor and TV host Murad Dadashov congratulated all the women with the International Women's Day and invited the film's creative team on the stage.

Film director Kanan Musayev, speaking at the event, said that the film is based on real event that took place in Mardakan, a small town in north-east of Baku in 2007.

“The movie's tagline is "Mothers are strong". Really, is there something stronger than a mother's love?" he said.

Then, actresses Hamida Omariva, Ayaz Salayev, Oksana Rasulova, Sugra and others spoke and voiced hope that the audience will enjoy this film.

The perfect scenario and story could not leave anyone indifferent. The touching scenes brought tears to the eyes of many viewers.

The storyline is about the young couple, Irada and Fuad, who faced a tragedy. Irada died from serious illness. However, her little daughter, the 5 year- old Zeynab, hopes to see her mother again. The attempts of relatives to explain that her mother is no longer alive failed. Little Zeynab still believes that her mother will come back.
One day, grandmother Sanuber khanum sees the poster of the rising star Leyla, who looks like her deceased daughter in law.

Perhaps Irada left this world, leaving behind her doppelganger Leyla? Will Fuad and Leyla be happy? Is there is a change for Zeynab to return her mother back?

The full-length film will be released on March 31 in cinemas of Baku.

Valeriy Ilishayev arrived from Moscow to join the premiere of new movie. The film was the last movie for honored artist of Azerbaijan Ilhama Askarova.