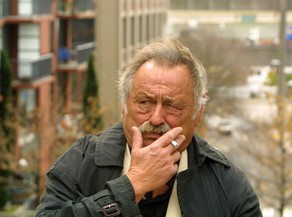 Jim Harrison, the prolific author, poet and outdoorsman whose novella of the American frontier, "Legends of the Fall," became a hit movie starring Brad Pitt and Anthony Hopkins, has died. He was 78.

He died late Saturday at his winter home in Patagonia, Arizona, his publisher said. Morgan Entrekin, CEO of Grove Atlantic, told CNN that Harrison was in his study working on a poem.

"We are very sad to hear about his death," Entrekin said. "He left a great body of work that is going to live on."
Harrison was a versatile writer who authored almost 40 books, including novels, collections of poems and eloquent essays about his passion for food. He was considered a master of the novella, a short novel or long short story, although he didn't find mainstream success until later in his career.