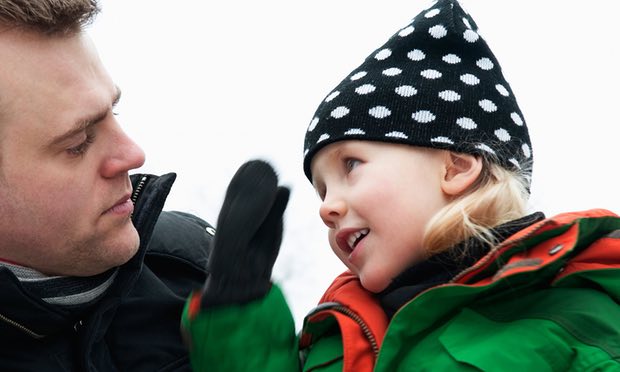 Fathers of toddler daughters are more attentive to their children than those of sons, according to a study that suggests unconscious gender biases can dictate the way parents treat their children.

In the study, which monitored 48 hours of interactions between fathers and toddlers, striking differences emerged between the way fathers spoke to and played with boys compared to girls.

Fathers of daughters spent about 60% more time attentively responding to their child, compared to those with sons. They also spent about five times as much time singing and whistling with girls and spoke more openly about emotions, including sadness.

Fathers of sons spent about three times as long each day engaged in rough and tumble play and used more “achievement-related” language, including words such as “proud”, “win” or “best”.

The research could not establish the extent to which innate preferences of girls and boys might be prompting different treatment from their parent. However, the authors concluded that it was likely that social biases were playing at least some role.

Jennifer Mascaro, an assistant professor of family and preventive medicine at Emory University, Atlanta, who led the work, said: “We should be aware of how unconscious notions of gender can play into the way we treat even very young children.”

There is plenty of evidence that differences exist in the behaviour, aptitudes and toy preferences of boys and girls from an early age.

“The question is always how meaningful are those differences,” said Mascaro. “It’s a really thorny thing to understand. As soon as they come into the world they are part of a society that has huge biases in how we interact with males and females.”

Studying the question scientifically has also proved problematic, since parents are often reluctant to admit to treating children differently, may be unaware of doing so, and are likely to behave differently when being monitored in a laboratory setting.

The latest work aimed to tackle the question in a natural environment. Fathers of toddlers (30 girls and 22 boys) were recruited and agreed to clip a small digital recorder onto their belts and wear it for one weekday and one weekend day. The device randomly turned on for 50 seconds every nine minutes to record any ambient sound during the 48-hour period. Every interaction with the toddler was then manually transcribed and analysed for various kinds of content.

The differences were striking, raising questions about how different parental treatment of boys and girls might shape the most basic aspects of personality.

Fathers of daughters were more likely to use words associated with sad emotions, such as “cry,” “tears” and “lonely”, which the scientists suggest may help girls develop more empathy than boys.

“The fact that fathers may actually be less attentive to the emotional needs of boys, perhaps despite their best intentions, is important to recognise,” Mascaro said, noting that restricted emotions in adult men is linked to depression and lack of social intimacy. “Validating emotions is good for everyone – not just daughters.”

Those with daughters also used more words associated with the body, such as “belly,” “cheek,” “face,” “fat” and “feet”, and the scientists raised the possibility of a link between these innocent interactions and body image problems that are far more common in adolescent girls than boys.

“We found that fathers are using more language about the body with girls than with boys, and the differences appear with children who are just one to three years old,” Mascaro said.