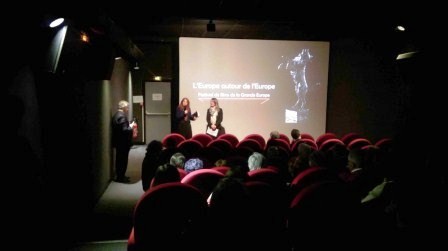 For the fifth consecutive year, the Paris office of The European Azerbaijan Society (TEAS) foundation has collaborated with Europa Film Akt (EFA), organiser of the eleventh L’Europe autour de l’Europe (Europe around Europe) film festival bylined with the phrase Chaos and Harmony. The evening brought three outstanding short films, all of which were receiving their European premieres, to around 70 Parisian cinephiles.

Screened on 7 April at the long-established multi-disciplinary Parisian literary arts hub known as L’Entrepôt, founded in 1975 by Frédéric Mittérand, former French Minister of Culture. The evening was introduced by Irina Bilic, Director, EFA, who commented: “The L’Europe autour de l’Europe festival is collaborating for the fifth year with TEAS, which does much to promote Azerbaijan in the cultural domain. Tonight’s films encompass the period since the country gained independence up to today.

“The Soviet style is very recognisable in the final film, Fransiz (French), whereas the two other films – Shanghai, Baku and My Grief is Light – achieve another rapport with the viewer, featuring another type of humanity, language and semiology. The work of young Azerbaijani directors has been presented at the Cannes Film Festival. Contemporary Azerbaijani cinema differs to what preceded it for many reasons, featuring an alternative view of the world, with a different style, narrative technique and type of script.”

Marie-Laetitia Gourdin, Director, TEAS France, remarked: “For TEAS, cinema is the most efficient method of taking the temperature of a society or a country. Over the two-decade span separating these Azerbaijani films, shot between 1995 and 2015, it is possible to see the evolution of a country that had only recently achieved independence from the Soviet Union.

The first two selections had only recently been completed. Shanghai, Baku, directed by Teymur Hajiyev, was based on Chekhov’s The Naughty Boy, transplanted to a slum known as ‘Shanghai’, located close to central Baku. This documentary-style film featured handheld, sometimes unfocused camerawork, semi-improvised dialogue and used nonprofessional actors to achieve a verisimilitudinous impact. Hajiyev’s earlier film Torn was shortlisted at the Director’s Fortnight of the Cannes Film Festival in 2014.

My Grief is Light, directed by the Moscow-based Ru Hasanov, featured some stunning cinematography that served to capture the essence of youth culture in Baku. The story focuses on a nihilistic young man, renowned for his musicianship. He is disparaged by everyone, yet is given the chance to prove himself at a high society party. He has to make the choice between music and family; and money and creativity. Once again, the use of zip pans, rather than edits between shots, gave the film a documentary edge, and the opening sequence of slow-motion young clubbers demonstrated the importance of music and togetherness in contemporary Baku. Hasanov’s debut film Chameleon was shortlisted at the Locarno Film Festival in 2013.

The screening concluded with Fransiz (French), directed by Vagif Mustafayev, one of the most prolific Azerbaijani directors, formerly Azerbaijani Vice-Minister of Culture, and Secretary of the Azerbaijani Film Director’s Union. Dating from 1995, this satirical comedy appropriately concerns the story of Alibaba, who has studied in France. French culture and language have completely displaced his mother tongue and language. He returns to Azerbaijan, being completely unable to communicate or relate to his family, and hides in the rafters of his own house. The plot revolves around the multifarious attempts of his family to assist him in reasserting his culture, and cleverly pokes gentle fun at some of the cultural elements that have been reasserted to reconstruct the Azerbaijani national identity. The film cleverly used surreal acting, sound effects and distanciation devices to create a hyperreal world.

This evening of ingenious and engrossing films demonstrated the excellent quality of Azerbaijani cinema, and indicated the need for greater international distribution of films from the country.