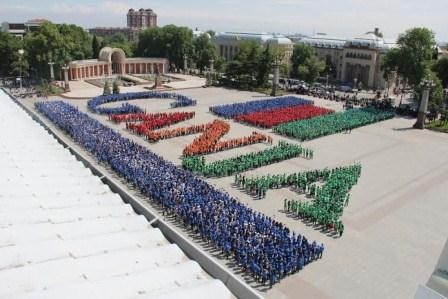 The “Ganja European Youth Capital” project was launched at the Heydar Aliyev Center in Ganja city of Azerbaijan.

Prior to the opening ceremony, the event participants paid tribute to national leader Heydar Aliyev and laid flowers at his monument. Head of Ganja Executive Power Elmar Veliyev declared the event open.

The European Youth Capital is a title awarded to a European city for the period of one year, during which it is given the chance to showcase, through a multi-faceted program, its youth-related cultural, social, political and economic life and development.

The initiative encourages cities to both continue and expand the implementation of new ideas and the innovative projects with regard to the active participation of young people in society, and seeks to present a role model for further development of youth policies in other European municipalities.