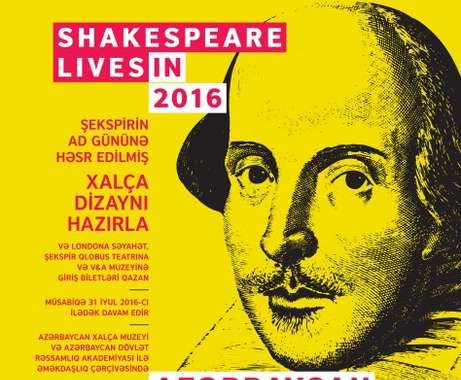 The Azerbaijan Shakespeare Carpet competition has been announced in honor of Shakespeare’s 450th anniversary.

The competition is the only one of its kind in the world. On the occasion of the launch, Elizabeth White, Director British Council Azerbaijan, stated, ‘Azerbaijan has a remarkable tradition of carpet-making. The oldest dated carpet, and one of the largest, most historically important and most beautiful carpets in the world is the Ardabil carpet from southern Azerbaijan. It was made some 15 years before Shakespeare was born; and it now displayed in the V&A Museum in London. What better way to mark Shakespeare’s anniversary in Azerbaijan than to create a new carpet? We’re proud to work with the Academy of Arts and the Azerbaijan Carpet Museum in this and to invite all creative people to join the competition and to design a carpet for Shakespeare’.

The designs are submitted online, and don’t need to be technical carpet design - they can be images made with a paint-box or a lap-top. The competition is open to anyone in Azerbaijan, with three categories: professional designers, children, and others. The best designs will be exhibited, and the prize-winning designs made up into carpets and presented. The winner of the competition will travel to London to visit the V&A Museum and Shakespeare’s Globe theatre, the British Council said.