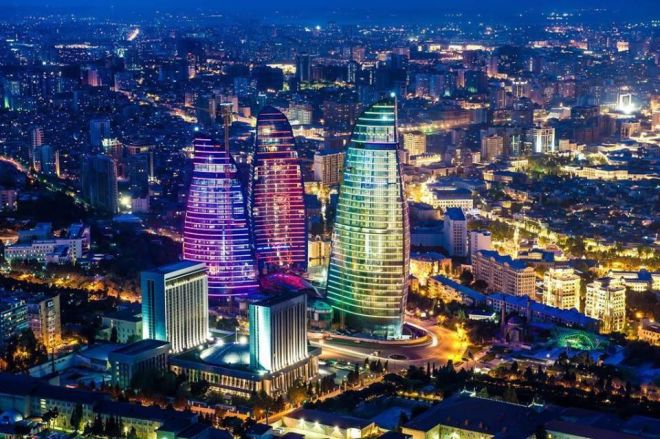 The US-based website CNN has published an article about Flame Towers.

Axar.az reports that in the article, Flame Towers were named as Central Asia's most luxurious hotel.

Here are some parts of the articles:

From traditional souks, mosques and UNESCO World Heritage sites, to futuristic skyscrapers, Baku, capital of Azerbaijan, offers an eclectic mix of old and new. Among the most startling additions to the modern skyline is the Flame Towers, a trio of sky-high structures that resemble tongues of fire reaching high over the Caspian Sea.

Designed by US architecture firm HOK, and with Tower 1 standing at 182 meters, they're the tallest buildings in Azerbaijan. And visitors can stay in the - one building's residential, one is for office use, while the third, the 165-meter-tall Fairmont Baku, is a contemporary five-star hotel.

"You can see Flame Towers as you fly into the airport, lit up with multicolored lights and shining the way," fashion designer and media professional Nina Zandnia tell CNN Travel. "They're the sign that lets everybody know they've reached Azerbaijan."

The venue's seven-story lobby is dominated by an extravagant chandelier, using five kilometers of strands, decorated with 840 lights and more than 600,000 crystal beads, and weighing a whopping two metric tons. Taking pride of place below is a limited edition black and red Fazioli, one of the most expensive pianos in the world. The M Liminal, designed by NYT Line and Philippe Gendre, was purportedly accompanied Nigar Jamal and Eldar Gasimov in the performance that took Azerbaijan to victory in the 2011 edition of the annual Eurovision song contest.

A typical one-bedroom suite on the 17th floor offers views of the Caspian Sea and if eligible, access to the Fairmont Gold lounge on the 19th floor, which comes with a private check-in area and concierge service.