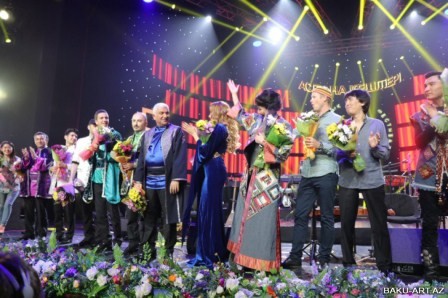 Azerbaijani folk band "Jangi" took part at the international festival “Astana Evenings” with support of the Representative Office of Japan Tobacco International (JTI) in Astana, the capital of Kazakhstan.

“Jangi” captivated the audience with a splendid mix of Azerbaijani Mugham and jazz.

About 800 music lovers attended the closing day of the 10th jubilee festival at the Palace of Peace and Harmony in Astana on 7 June which brought together music bands from the U.S., Germany, Russia, Belarus, Kazakhstan and Azerbaijan.

“Astana Evenings” is an international festival organized annually by the Degdar Humanitarian Foundation with the support of JTI.

Participation of Azerbaijani musicians this year was a result of agreement between the Degdar foundation and the International Mugham Center of Azerbaijan.

“Jangi” ensemble was created in 1992 by a renowned jazz pianist and composer, People’s Artist of Azerbaijan Rafiq Babayev. The band promotes Azerbaijani Mugham in a synthesis with other music varieties such as jazz and rock. Up to now, the ensemble has given concerts in France, Norway, the USA and Turkey. The artistic director of the band is Mirjavad Jafarov.

The court ruled in Tonoyan's favour