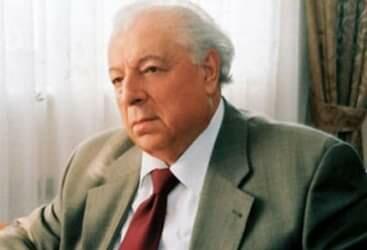 The French literary publication Boojum has published a review of the French-language book "My Rancher Father" by well-known writer and publicist Ali Ildirimoglu.

Ali Ildirimoglu - "My rancher father", dedicated to my father

Who can show Azerbaijan on the map and quote one of its writers? Translator Shahin Sinariya undertook this arduous task to build a bridge between our cultures. After translating Philippe Le Roy into Azerbaijani, he presents the latest work of the country's famous writer Ali Ildirimoglu, a beautiful autobiographical story entitled "My rancher father."

Journalist and writer Ali Yildirimoglu is a prime figure in the intellectual life of Azerbaijan. He was born in 1927 in then-Soviet Azerbaijan. He was first a teacher, then a journalist and soon the head of a leading newspaper. Ali Ildırımoğlu soon became a real example of the power of devotion to culture and country. He was awarded the Shohrat Order (Order of Glory) of the Republic of Azerbaijan and left behind many creative examples, leaving an important and impressive manifestation. Unfortunately, although his works were perfectly developed by TEAS Publishing House, he is still little known in the West. He has hundreds of stories, novels and articles translated into the languages ​​of neighboring countries (mainly Russia, Iran, Turkey). He is perhaps the only person who can convey the history and culture of his country to the world.

Ali Ildırımoğlu, who is approaching the age of ninety, travels to the country of his childhood. The novel is a symbol of respect for the rancher father, whom he adored. "My Rancher Father" has a very interesting autobiographical dimension. The work immerses the reader in the daily life of a small village in Soviet Azerbaijan, far from the capital, in the 1920s. The story reflects the views of the author, who was then a small child born into a peasant family. He summarizes his memories of being a child without a mother at the age of five (childhood, youth, and then adulthood) with his thoughts on the war, culture, and multiculturalism in Soviet society in Azerbaijan in the early and late 20th century.

Everything there is interconnected: his father, friends, cousins, meetings, tastes, travels, relationships with children, neighbours. The work of women in Soviet society is also very interesting. The story sometimes becomes irrelevant and changes the tone of the writing, as if the old writer is running after his pen and does not want to forget his memories. Nevertheless, the work is full of poetry, nostalgia, generosity, customs and realities of Soviet Azerbaijan.

"My rancher father" is a chronicle of rural and communist Azerbaijan. Both funny and bitter ... Yes, funny, even when the author talks about the Karabakh war and the unjust attacks he was a victim of the story became exciting, and when he talks about the best memories of his life, it is a bit naive but fragile chronicle... This story displays a simple, humble and restrained human image. The Soviet regime and its consequences, the bloody conflict with the neighbouring state, religion, politics, as well as childhood memories - these are the plots told by Ali Ildirimoglu, who presents his characters in a more astonishing way.

Ali Ildirimogu talks about his professional life, the attacks he witnessed and his relations with employers as he left the village. Then the tragic death of his father arrives.

The third part deals with the bloody war between the two neighbouring republics, the deep traces of this war, both in society and in the soul of the author. Ali Ildırımoglu's "My Rancher Father" is to immerse oneself in a completely different world, space and time, in a world where Soviet influence is deeply reflected.

But above all, it is a wonderful example of a father's love.

The great Azerbaijani writer, who is on the verge of death, touches us with his work dedicated to his father.