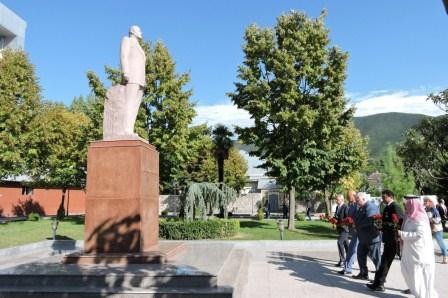 As earlier reported, the festival co-organized by Azerbaijan`s Culture and Tourism Ministry , Shaki City Executive Authority and the Union of Theater Figures will see participation of theatre troupes from Turkey, Russia, Georgia, Iran, Ukraine and the UAE.

The solemn opening ceremony of the Festival was attended by organizers, TURKSOY representatives, renowned theater and art figures, guests and theater lovers.

Prior to the opening ceremony, the festival participants visited Azerbaijan’s national leader Heydar Aliyev’s statute erected in front of the building of Shaki Executive Authority, put flowers and revered his memory.

Festival opening participants was addressed by the head of Shaki Executive Authority Elkhan Usubov, Azerbaijan’s deputy minister of culture and tourism Adalet Veliyev, who spoke of the history and development of the Azerbaijani national theater, the first theater and the first opera that was staged in the Muslim East.

They noted that the theatrical art of Azerbaijani people is rooted in the ancient folk festivals and dances.

The history of Azerbaijan theater started with spectacles "Vizier of Lankaran khan" and "Haji Gara", based on plays by Mirza Fatali Akhundov in March-April 1873.