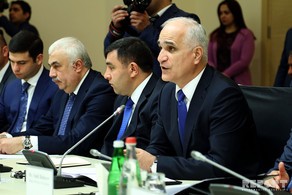 Report informs, current economic relations between the two countries and prospects of cooperation have been discussed in the event, which held as a continuation of the enlarged meeting between Azerbaijani and Iranian delegations in Astara, Azerbaijan yesterday.

Addressing the meeting Sh.Mustafayev mentioned implementation of nearly 60 mutual visits between the two countries since April, 2014, signing of over 30 documents, organization of two sittings and several meetings of the State Commission, 6 meetings between the head of states during last 2 years as well as 2 meetings in last 2 months. The minister has congratulated M.Vaezi on the occasion of awarding 'Order of Friendship' by Azerbaijani President for his great contribution to the development of the Azerbaijani-Iranian relations.

Sh.Mustafayev has noted importance of speedy ratification of agreements 'On construction and operation of Khudaferin and Giz galasi hydropower installations over Araz River' and 'On construction and operation of Ordubad and Marazad hydroelectric power plants', which have been signed between Azerbaijan and Iran. The minister stressed that implementation of the Framework Agreement for the sale of electric power is very important.

Iranian minister M.Vaezi stated, development of cooperation between the two countries and Azerbaijan-Iran relations never was at such a high level. Then 4 memorandums have been signed between 'Sumgayit Chemical Industrial Park' LLC, 'Azerbaijan Investment Company' OJSC, 'Azersun Holding' LLC and Iranian 'Iran Khodro', 'Darou Pakhsh' companies in regard with implementation of joint projects in the automotive and pharmaceutical production in Azerbaijan.