Cancerous side of potato 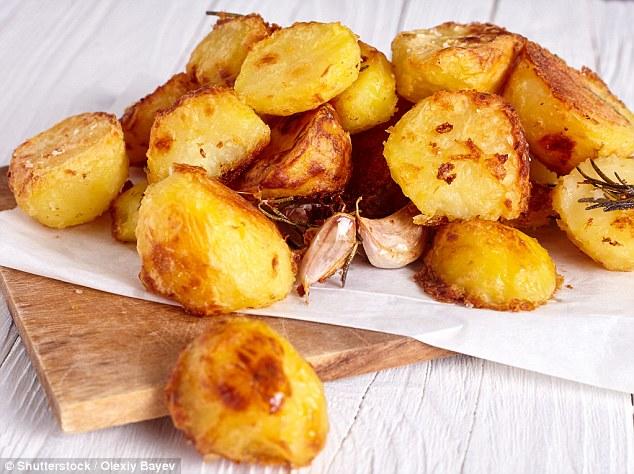 The perfect roast potato should be crunchy, according to recipes promoted by celebrity chefs.

But overcooking spuds could increase the risk of cancer, food watchdogs will warn today.

It is urging cooks to move away from fried, baked and toasted foods and not serve anything more than a light golden yellow.

The warnings are based on concerns about consumption of the chemical acrylamide, which is caused by the browning process.

The FSA suggests people could cut the risk by switching from skinny chips to chunky versions, because, weight for weight, they have less surface area.

It also advises people to eat more boiled, mashed and steamed foods, and urges them to stop storing potatoes in the fridge, which leads to a chemical change called cold sweetening that increases acrylamide.

The FSA, whose slogan for the campaign is ‘Go for gold’, has spoken to trade bodies representing fast-food firms, as well as fish and chip shops, to alert them to the concerns.

Manufacturers of processed foods such as oven chips and crisps are also being warned.

Acrylamide, which is also found in tobacco smoke, has been shown to cause cancer in animal tests. The evidence suggests that all age groups, but particularly children, are consuming more acrylamide than they should.

Dr Guy Poppy, chief scientific adviser to the FSA, said: ‘I used to have a view that the nice way to make a roast potato was to pre-cook them, fluff them up so they have a large surface area and put them in a very high temperature oven.

'The point is that because of that surface area and cooking style, the amount of acrylamide will be higher.

‘It might be that eating two roast potatoes cooked like that will have the same acrylamide as five cooked in another way.

‘The amount of acrylamide in food has the potential to increase the risk of developing cancer for all ages during a lifetime of exposure.’

But cookery writer Prue Leith said: ‘They should concentrate on recommending that we eat more veg and less meat rather than demonising certain foods.’