Story of youngest mom of the world - 5 years old Lina 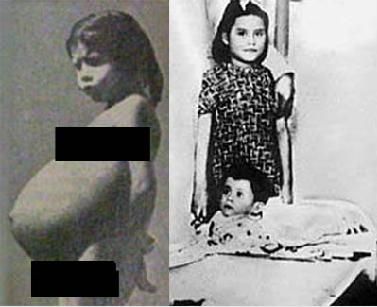 Doctors in Pisco, Peru couldn’t believe their eyes when they first saw Lina Medina. They thought that it was a tumor growing up in her stomach. But they had to deal with one of the strangest cases in the history of medicine.

Her family took the young Lina to a hospital and a doctor named Gerardo Lozada examined the 5-year-old girl. Linda's reproductive organs were fully developed, and she was 8 months pregnant. She was having periods since the age of three - but further investigation discovered that she suffered from a condition called “precocious puberty,” and her menstruation had in fact begun when she was eight months old.

Normally, puberty begins at the age of 11 for girls and 12 for boys. Precocious puberty is when the onset of puberty occurs before the age of eight in girls and nine in boys. Its cause is unknown but, like later age puberty it results in enlarged breasts, pubic or underarm hair development and rapid height growth. For Lina's case, it also means the child can give birth.

A few weeks after their last visit, on May 14, 1939, Lina had a C-section because her pelvis was too small for a natural birth. The child, weighing 6 pounds, was well-formed, in good health and was named Gerardo. Linda left the clinic with her child after a few days.

In 1979, her son died from bone marrow disease at the age of 40. Lina, who has never spoken about the pregnancy, is still alive aged 85. She married in the 1970s and gave birth to a second son.

Lina and her son were raised as brother and sister in the village they were born. No one knew they were mother and son. Even Gerardo did not know about it until he was 10 years old. Of course, there is a darker side to the pregnancy...

It has never been revealed who the father was, or the circumstances surrounding the impregnation.

Immediately after the incident, Lina's father was arrested for sexual harassment and abuse, but he was released due to lack of evidence. But it is still unknown how 5-year-old Lina got pregnant.