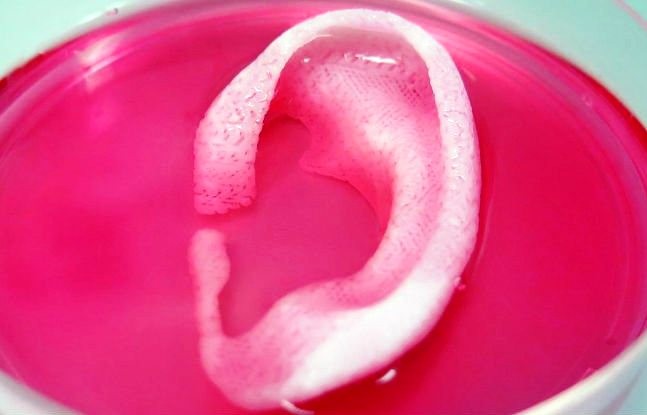 For the first time, scientists have used a 3D printer to produce life-sized body parts and tissues using living cells as the 'ink'. Not only are these structures large and sturdy enough to be a viable replacement for the real thing - something that previous bio-printers have failed to do - they're personalized and functional, not a 'one size fits all' cosmetic add-on.

"It can fabricate stable, human-scale tissue of any shape. With further development, this technology could potentially be used to print living tissue and organ structures for surgical implantation," one of the researchers behind the technology told The Guardian.

While bio-printers have been used to print miniature or more simplistic replicas of organs - including brains and kidney tissues - so scientists can carry out research on them rather than on real ones (lab animals everywhere, rejoice), until now, no one’s been able to print something large, stable, and 'alive' enough to act as a reliable transplant.

One of the biggest hurdles has been in figuring out how to keep those cells alive through the printing process, and how to build structures that incorporate all the things that keep our organs running, such as blood vessels and vascular structures to maintain oxygen flow.

"Cells simply cannot survive without a blood vessel supply that’s smaller than 200 microns [around 0.1 cm], which is extremely small," Atala told Gizmodo, adding that this has been the limiting factor for bio-printers in the past. "That’s the maximum distance. And that’s not just for printing, that’s nature."

"At the same time, the cells secrete a supporting matrix that helps maintain the implant's shape," Arielle Duhaime-Ross explains . "By the end of this process, the cells have reorganized themselves in a self-sufficient manner that negates the need for supporting materials."

So once these structures are implanted, they shed their artificial scaffolding, and then encourage the growth of living supports from the recipient's body, such as new tissue, bone, or cartilage cells.

The researchers demonstrated their technology by making ear, bone, and muscle structures using living cells extracted from humans, rabbits, mice, and rats. They’re yet to test the implants on humans, but when they implanted human-sized ears under the skin of mice (yep, those poor mice), the ears retained their shape, grew new supporting cartilage, and maintained a healthy blood supply within two months.