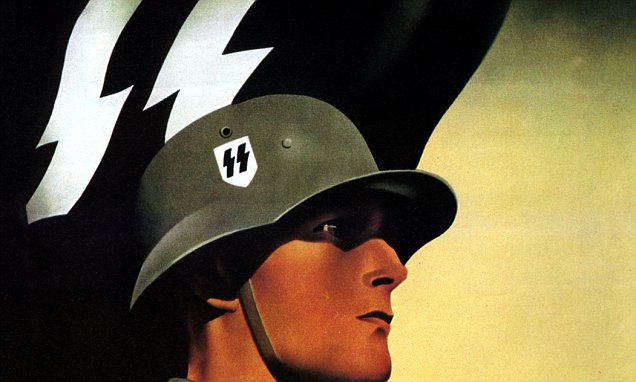 The Nazis claimed the double lightning flashes of the SS were 'ancient runes' that extolled the supremacy of the German race.

But a new TV documentary has debunked the myth, revealing that Heinrich Himmler paid £1 to an out-of-work illustrator to create them.

Walter Heck designed the SS symbol in 1929 and is believed to have copied it from the signs on electricity pylons in the country at the time.

It has also been suggested he wanted to replace the 'S' of the alphabet because he found its form too 'soft'.

At the time, Himmler, the head of the SS, and a firm believer in extolling the supremacy of the German race had claimed the symbol was an ancient rune and had it adorn every uniform and building of his 'black order'.

The SS subsequently spent a considerable amount of time and energy to tracking down runes and markings on prehistoric pottery which vaguely resembled the SS symbol in a futile effort to verify its 'authentic' Germanic origins.

Indeed, Christian symbolism in Nazi Germany was to be replaced by Germanic runes and symbols.

A TV documentary titled 'Symbol of Evil' shows how Himmler in fact paid the illustrator to create the symbol for £1.

Since the end of the war the display of the S.S. marque in public - along with swastikas and other Nazi Party symbols - has been strictly prohibited in Germany.