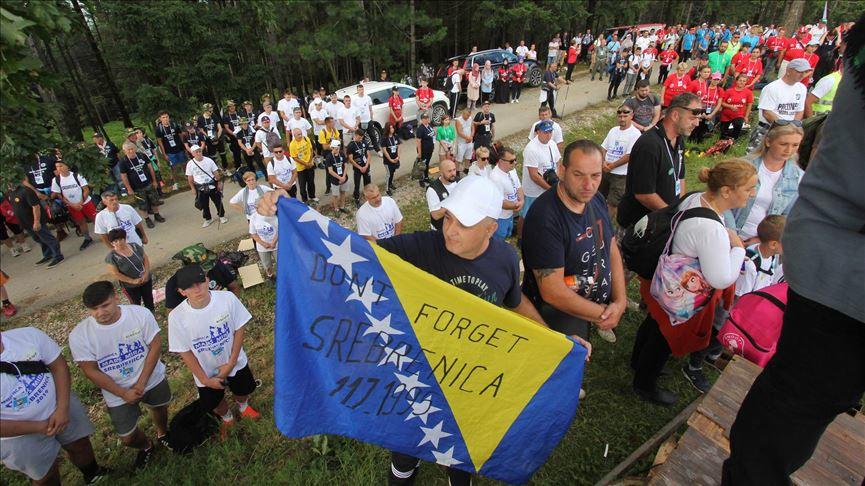 Thousands of people from all over the world set off for a three-day peace march in Bosnia and Herzegovina to commemorate the 24th anniversary of the genocide in Srebrenica.

Axar.az reports citing AA that the march began from the town of Nezuk near the Bosnian city of Tuzla on Monday.

Hamdija Fejzic, president of Srebrenica Commemoration Ceremonies Organization Board, told Anadolu Agency the peace march has become an international event which has thousands of participants from all over the world.

Fejzic added that more than 5,000 people participate in the march each year.

More than 5,000 participants, who gathered in the city since early morning hours, will cover a total distance of approximately 100 kilometers (62 miles). The walk is expected to conclude at a cemetery in Potocari, a village in eastern Bosnia-Herzegovina, just northwest of Srebrenica town, where a funeral prayer and burial ceremony will be held for 33 victims of genocide.

Participants will travel about 35 kilometers (22 miles) each day to reach Potocari within the scope of the Peace March organized for the thirteenth time, and will spend the nights at designated forested areas.

During the long walk, they will also be given details about the genocide and told about the memories of the survivors who took the "Death Road".

The path from Srebrenica to Tuzla is commonly known as the "Death Road".

Since 2005, thousands of people have attended the Mars Mira (which means Peace March in local Bosnian language), which follows the same forest path that was used by Bosniaks when they were fleeing the Srebrenica genocide.

More than 8,000 Bosnian Muslim men and boys were killed after Bosnian Serb forces attacked the UN "safe area" of Srebrenica in July 1995, despite the presence of Dutch troops tasked with acting as international peacekeepers.

Srebrenica was besieged by Serb forces who were trying to wrest territory from Bosnian Muslims and Croats to form their own state.

The UN Security Council had declared Srebrenica a "safe area" in the spring of 1993. However, Serb troops led by Gen. Ratko Mladic -- who now faces genocide charges at The Hague -- overran the UN zone.

The Dutch troops failed to act as Serb forces occupied the area, killing about 2,000 men and boys on July 11 alone. Some 15,000 Srebrenica people fled into the surrounding mountains but Serb troops hunted down and killed 6,000 of them in the forests.

A total of 6,610 victims lie buried at the Srebrenica Genocide Memorial in Potocari.

At Wednesday's commemoration ceremony 33 more identified victims to be buried at the cemetery in Potocari, eastern Bosnia.