The biggest massacre to muslims in Europe - Photo 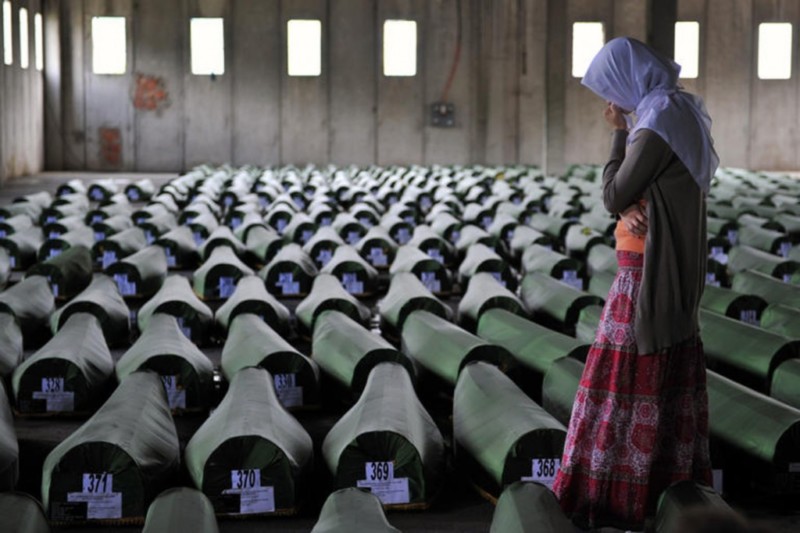 Thousands of mourners poured into Srebrenica on Thursday (July 11) to mark 24 years since the massacre in the eastern Bosnian town.

Axar.az reports that some 8,000 Muslim men were killed and it was regarded as the worst single atrocity in Europe since World War II.

During a ceremony to mark the anniversary, the bodies of 33 victims will be given a proper burial.

The killings were carried out by Bosnian Serb forces, and several top officials, including former Bosnian Serb leader Radovan Karadzic, have been convicted of genocide at the United Nations tribunal in The Hague over their role in the massacre.

Sortly about what happened in Srebrenica:

Srebrenica, Bosnia was the world's first United Nations Safe Area. In other words, it was a place where, regardless of the civil war and bloodshed occurring around the vicinity, civilians were to be protected by the UN's troops.

Srebrenica's status and the safe area policy were established in the spring of 1993. That was when Serb soldiers almost lay siege to the city. The United Nations and America, in particular, feared there would be a bloodbath once the Serbs took over. This was why the town was declared a safe area. Five other towns and cities in Bosnia were given this status: Zepa, Gorazde, Tuzla, Sarajevo, and Bihac in northwestern Bosnia.

Although the UN Secretary General at the time, Boutros Boutros Ghali, had demanded thousands of soldiers, Srebrenica was protected by about 600 primarily Dutch army officers.

Between July 6 and 8, 1995, Serb forces again lay siege to the town and began shelling. Thousands of civilians were already in Srebrenica after fleeing from other attacks by Serbs.

The next day, an estimated 23,000 Muslim women and children were separated from their husbands, fathers, grandfathers, brothers, sons and uncles and were forced to march towards another city. The Serbs kept the men, starting from age 12 onwards for "interrogation"

And then the massacre began. Current estimates say that over 8,000 Muslim men were executed in fields, schools and warehouses.

The UN peacekeepers handed over close to 5,000 Muslims who had sought protection at a Dutch base in return for 14 Dutch peacekeepers.

Until the revelation of video evidence on June 1, 2005 at the trial of Slobodan Milosevic at the International Criminal Tribunal for the former Yugoslavia, Serbia denied that forces from Serbia proper had taken part in the atrocities of the Bosnian civil war between 1992 and 1995. The video showed Serbian paramilitary police murdering unarmed Muslims from Srebrenica.

The irony of Srebrenica is that it was the worst case of genocide in Europe since World War II in the first area ever declared a safe area by an international organization.

In November 1999, the UN released a report on its role in Srebrenica and said this: "Through error, misjudgment and the inability to recognize the scope of evil confronting us, we failed to do our part to save the people of Srebrenica from the Serb campaign of mass murder." After that report was released, Bosnia's U-N ambassador, Muhammad Sacirbey, praised it, saying it took courage for the UN leadership to admit its mistakes.

In March 2003, thousands of people attended a mass funeral in Srebrenica for the victims of the town's massacre. The 600 men who were buried were the first to be identified from remains gathered from more than 60 mass graves. The ceremony was conducted by Bosnia's top Mufti, Mustafa Ceric. He called for justice, but urged the families of the victims not to seek revenge for Srebrenica's massacre.

Radovan Karadzic and Ratko Mladic, the two men indicted as the main architects of the Srebrenica massacre, remain at large.